The Guyana Energy Agency (GEA) will be recommending that an electric vehicle be added to every government ministry’s fleet following recent tests it conducted with an electric car.

GEA’s Chief Executive Office Dr. Mahender Sharma told the media on Thursday that he had been driving a Nissan Leaf for several weeks now. 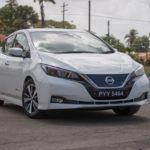 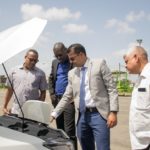 The GEA head said the electric vehicle operates at 25 percent the cost of a petrol vehicle of the same class.

“We compared it against what I was driving before, the Suzuki Vitara. The Suzuki Vitara gives a mileage of about 4km/litre. The mileage on this is [electric car] is about 4.5km per kilowatt-hour. When we did the conversions and the comparisons, the Vitara was costing us $50/km, while this car with the regular GPL tariffs that we pay at GEA, cost just about $10/km,” Dr. Sharma stated.

Tax exemptions are available for the importation of electric cars. Cars four to eight years old do not attract customs duties, excise tax, nor VAT, while those less than four years old only attract VAT.

A proposal for charging stations to be built in various parts of the country has been submitted.