—says decision must be respected

His Excellency President David Granger today said the content of the letter penned by Foreign Affairs Minister Dr Karen Cummings to the United States Senators, the US Ambassador to Guyana and the Carter Centre, is the policy of the Coalition Government and has asked that the decisions taken be respected.

Last Friday Dr Cummings responded to another request by US Ambassador to Guyana Sarah-Ann Lynch for the government here to reconsider the re-admission of the Carter Centre Observer Mission and the International Republican Institute (IRI) to participate in the ongoing national recount of the March 2, 2020, General and Regional Elections. 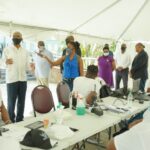 His Excellency President David Granger during his visit to the Arthur Chung Conference Centre where the national recount of the ballots cast in the March 2, General and Regional Election is ongoing (courtesy MOTP) 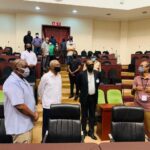 His Excellency President David Granger during his visit to the Arthur Chung Conference Centre where the national recount of the ballots cast in the March 2, General and Regional Election is ongoing (courtesy GECOM)

The government’s response pointed to the public health situation which arose as a consequence of the coronavirus (COVID-19) pandemic, and the series of emergency measures put in place since March 16, including the imposition of a curfew and closure of Guyana’s international airports.

Dr Cummings’s missive stated that it may be impossible for the Carter Centre and IRI advisor to participate in the process.

“What the Minister of Foreign Affairs has written and spoken is government policy and I would like people to respect what she has done and abide by the measures the government of Guyana has implemented. We take it very seriously with our measures against COVID.”

The Head of State said the Carter Centre remains a friend of Guyana, noting that it was welcomed along with other observer missions when Guyanese went to the polls on March 2.

The political opposition has since been levelling criticisms against the government for its decision. It said the Carter Centre is needed to ensure the “credibility” of the process.

But President Granger said that the decision has nothing to do with the credibility of the recount. In fact, he said his government reposes its confidence in the high-level CARICOM team currently scrutinizing the process ongoing at the Arthur Chung Conference Centre.

He said his government is concerned about the welfare of all Guyanese and has been implementing measures to safeguard citizens since the death of the first victim in early March.

“COVID is not an excuse, it is a reality and we don’t have to use COVID. It is a pandemic which has killed hundreds of thousands around the world. It is not something whimsical, it is not bad weather or an empty excuse that we have invented, it is a fatal disease.”

The President maintained that it is his duty to protect the people and every effort will be made to do so.