Georgetown, Guyana – (August 7, 2016) President David Granger announced that his Government will establish a Lands Commission which will be tasked to rectify that existing anomalies and resolve the controversies surrounding thousands of hectares of communal lands across the country. He was at the time addressing a large gathering at the Fourth Annual State of the African Guyanese Forum held at the Critchlow Labour College earlier today.

The forum, which was organised by the Cuffy 250 Committee, was held under the theme, “African Guyanese self-realisation: Challenges for the next 50 years.

The President said that these communal villages are the cradles of the free economy and of local democracy as a whole. He called on the Cuffy 250 Committee to pay closer attention to what is happening at the level of the villages. Creating opportunities to foster the growth of village economies is one of the five objectives which he outlined as part of Guyana’s plan of action for the United Nations (UN) designated International Decade for People of African Descent. 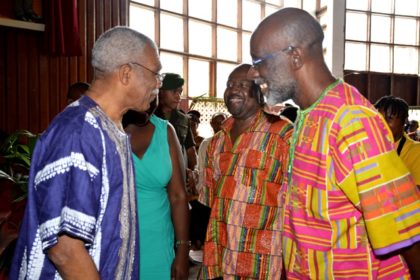 The Head of State pointed out that twenty months of the ‘International Decade’ have already elapsed and as such, there needs to be, now, an organisation and a plan in order to ensure the implementation of the Programme. The main objective of the ‘International Year’ was to raise awareness of the challenges facing People of African Descent with the view of fostering discussions that could generate proposals for solutions to tackle these challenges. 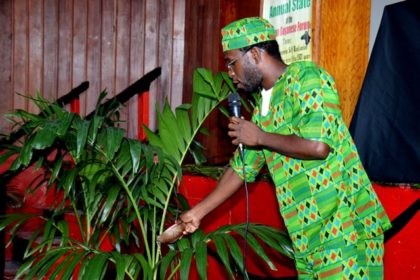 Mr. Gerald George performing a libation ceremony at the beginning of the forum

He assured that his Government will work with non-governmental organisations which represent people of African Descent in fulfilling the objectives of the decade, another of which includes education. The President said that education remains the way out of poverty and inequality. He pointed out that while the right to free primary education is protected under the Constitution, it does not prevent more than 4,000 Guyanese children from dropping-out of school each year.

“Just as our illiterate fore parents 178 years ago, saw the benefits of education, we their educated descendants, can do no better than to ensure that every single child goes to school and stay in school… This is what the boats, bicycles, and buses programme is all about. It is about getting children to school and keeping them in school,” the Head of State said.

Achieving equality and eliminating ethnic discrimination is another objective which the President said Guyanese should endeavour to fulfil. “Discrimination against anyone promotes insecurity and social exclusion and that could lead to disorder,” he said. 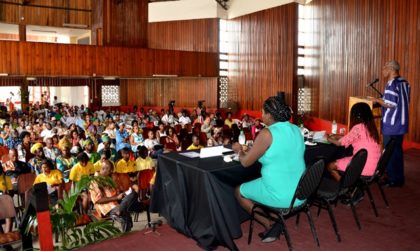 He also spoke about employment and said that the Government is aware of the plight faced by many school-leavers to find jobs.

“The Plan of Action must aim at reducing the high incidence of unemployment in the economy and aim at creating an entrepreneurship programme to assist young Guyanese to establish and manage their businesses,” he said.

Speaking of the horrors of the system of slavery which Africans have had to endure, President Granger said that Governments of the Caribbean including that of Guyana are insisting on an apology for the crime of enslavement and for the payment of reparations but noted that this is not the time to agonise interminably about the conditions in which the country finds itself.

“This is the time to organize and mobilise so that at the end of the decade, the Government and the Guyanese people on the whole can report confidently they have achieved the objectives of the United Nations International Decade for People of African Descent,” the President said.

He called on African Guyanese organisations to get more involved and consult among themselves so that the main objectives of the International Decade for people of African Descent as well as other specific measurable targets, can be achieved. 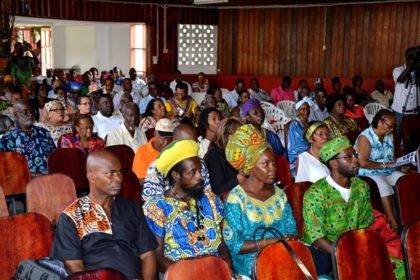 A section of the gathering

“August 2016 obliges us not only to look back at the contributions of those who helped to build Guyana but also to look forward to the type of country we wish to bequeath to our children and grandchildren. All Guyanese are entitled to share equitably in the patrimony of this great country,” President Granger said.

The Cuffy 250 Committee is made up of a group of Guyanese in the United States and Guyana who came together in 2013 to observe the 250th anniversary of the Berbice Revolt, led by Cuffy, against the slave system. It is dedicated to encouraging socio-economic and cultural revitalization within the African Guyanese community and the fostering of ethnic and racial equality in Guyana.