The Guyana Police Force has stated that the organisation is prepared to serve and protect the nation.

This statement comes in light of the recent violent protests that occurred in east Berbice on March 6, 2020, which resulted in injuries, loss of life and damage to property. 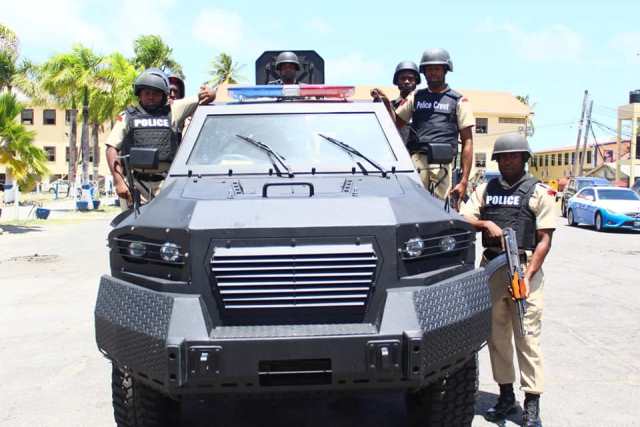 The armoured vehicle acquired by the Guyana Police Force.

Of the six police officers who were injured and hospitalised, one rank is still recovering in the hospital. The Cops and Faith community network is providing counselling to the officers, who are said to be recovering well.

The ranks were attacked by a group of men armed with cutlasses, wood, iron and other weapons on March 6.

The students who were attacked and injured while travelling on a David G school bus have been discharged from the hospital, but are now dealing with the trauma they had to endure.

The chaos and violence also saw an 18-year losing his life, another person has been arrested for being in possession of a firearm, along with millions worth in damage to public property.

Burning of vehicles, blocking of roads and destruction to public property were the actions of disgruntled PPP supporters following GECOM’s release of results for Region Four.

The Guyana Police Force has since issued a stern warning against violent protest and called on citizens to keep the peace. They have also been looking into their ‘public order equipment’, an armoured vehicle in the event of another violent protest.