The Ministry of Communities, Department of Housing has embarked on another series of its “Meet the Public Day” initiatives. Today, ranks of the Guyana Police Force (GPF) were the beneficiaries.

Over 80 ranks stationed within Region Three, were served today at the Leonora Police Station during the department’s exercise. 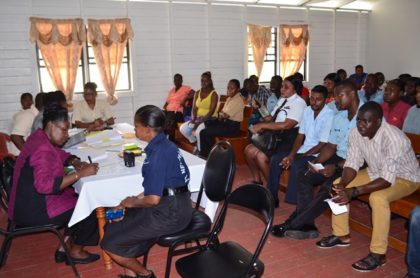 The ranks benefitted from house lots in the low and middle income categories. Prices ranged from $92,000 to $1.5M; in Zeelugt Phase 1 and 3, De-Groot-en-Clyne, Utivulgt,  Zeeburg, De Williem, Anna Catherina, Leonora and Tuschen, Phase 2.

The exercise is in fulfillment of a commitment made to the Guyana Police Association, Minister within the Ministry of Communities, Valerie Sharpe- Patterson explained.

At the time of the Association’s request, the Ministry did not have available lands. The Minister however, promised the Association that as soon as land became available, the ranks would benefit.

“The lands we have available in Region Four are from $1.5M up,” she told the ranks. “… you really should tap yourself on the shoulder and say you (are) lucky, because I said I made a commitment to the Guyana Police Force,” she said.

The ranks were very fortunate, as the Ministry was able to find low cost land in the region for them, the Minister said.

Minister Sharpe-Patterson also told the ranks that she was privileged to serve them, “because you have been serving our country and it is time somebody serves you,” she said.

Making representation for the house lots for the ranks, the Guyana Police Association, had identified 81 ranks with requests for house lots in Region Three. “That is quite a huge number, and I hope we can satisfy as much as possible,” the Minister expressed prior to the commencement of the allocation process.

Public Relations (PR) Officer and Member of the Guyana Police Association, Sergeant Natasha Alkins, in an invited comment, told the Government Information Agency (GINA) that the Association came up with idea to make the request of the Minister for the house lots after it was realised that the Joint Services Scheme could not meet the demand of all ranks of the Police Service. 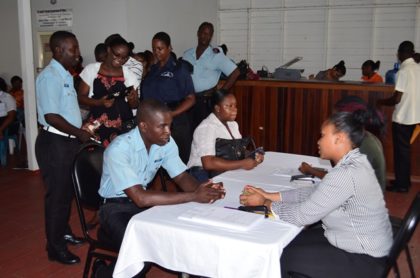 “We have some ranks, like the constables that we are trying to get  some low income lots for them…because their salary is not that much, so we are trying to assist them in getting house lots,” she said.

Alkins, who noted that the exercise was a first in history for the GPF, said that it was needed, as many of the ranks have been waiting for years to get an acknowledgement to their house lot application.

Minister Patterson-Sharpe, who was accompanied by the staff of the Central Housing and Planning Authority (CH&PA) at the exercise, explained that the members of the Association had lobbied her office in March for the provision of low cost house lots for all ranks of the force.

Additionally, GINA spoke to a few of the eager ranks, who flocked the Leonora Police station and benefitted from allocation of lands. “This feels great getting through because I have applied since 2014 and we were given this opportunity to actually get through with our house lot at such a fast period too, so it really feels great. We must express our gratitude to the entire Ministry of Housing,” Leroy Carrol said.

Minister within the Ministry of Communities, Valerie Sharpe-Patterson addressing the ranks at the “Meet the Public,” exercise at the Leonora Police Station

During the exercise the ranks had the opportunity to make an application, have their interview conducted and their allocation completed, all at once. The ranks were also advised that they have one month to pay half of the house lot cost, and six months to pay the remainder.

The allocation of land to police ranks is expected to continue as the Ministry plans to execute similar exercises in Regions Five and Six, shortly.