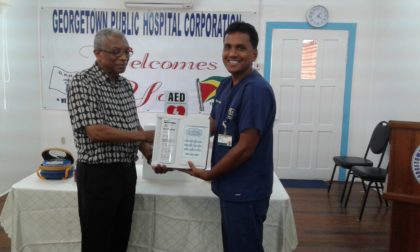 The equipment included an electrocardiogram (ECG) machine among other critical equipment for emergency care.

Dr. James Cort, a native of Fyrish village, on the Corentyne, and a member of the group, explained that the group has been working closely with Guyana over the years, providing support to health care facilities in Regions Five and Six, but is now extending it to form a strong relationship with the GPHC.

He added that the group has received support from Allan Johnson, GPHC’s Chief Executive Officer (CEO), for a number of years. Johnson had served at the New Amsterdam Hospital. 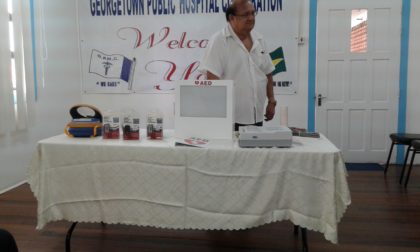 Dr. Carl Hanoman, Georgetown Public Hospital Corporation’s board chairman along with some of the equipment that were handed over to the hospital by the Fyrish/ Gibraltar/Courtland Support Group

Dr. Cort has been visiting Guyana twice yearly since 2005, to conduct free clinics for children and adults in Berbice, under the auspices of the Fyrish/Gibraltar/Courtland Overseas Support Group. He has since adopted the Fyrish Health Centre, and commenced an ongoing programme with the medics and ancillary staff there, with the specific objective of inculcating in them patient-education and social values associated with providing full medical care to the people in their community.

He returns to Fyrish each year in April and October, bringing with him many of his colleagues who work at the East Orange, Beth Israel, the St. Barnabas and Clara Maas Medical Centres, along with other institutions based in boroughs in the US Tri-State area. The group’s next visit will be in the last week of October 2016.

Founder, of the Support Group, Clinton Williams pledged the group’s continued support to the medical sector in Guyana, primarily on expanding its relationship with the GPHC.

Further, GPHC’s Head of Accident and Emergency Unit, Dr. Zulificar Bux, expressed gratitude to the group for the undertaking. Pointing out that A & E is the base of a hospital; it is the area where a patient is triaged and administered emergency care, however, it is at times forgotten. He added that, “these machines will not only do regular patient care, they will save lives…as soon as tomorrow when we will start using them.”

Dr. Carl Max Hanoman, GPHC’s board chairman also expressed heartfelt thanks to the group, whose members have shared long relations with him as well. 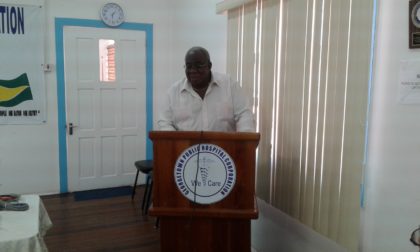 Clinton Williams, Founder of the Fyrish/ Gibraltar/Courtland Support Group delivering brief remarks at the handing over of medical equipment to the Georgetown Public Hospital Corporation