Head of the BCU, Dr. Shilindra Rajkumar, noted that the unit was established in 2002 to increase the level of care provided to burns victims with the help of the foundation. He pointed out that the establishment of the unit has contributed to a significant reduction in the mortality rate as a result of burns. “We have moved from 60 to70% mortality rate to about 33%,” Rajkumar said.

Three patients were also sent overseas for surgeries through the NGO, in the last six months, all of whom benefited from free surgical procedures. The only expense was for accompanying family members, accommodation and airfare. 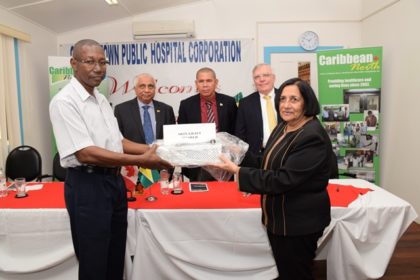 Minister of Public Health, Dr. George Norton expressed gratitude to the NGO, noting that that “the Guyana Government is eternally grateful for your support.”  One of the laptops will be used by the Nurse-in-Charge for deployment, he said.

Harry Harakh, President of the Foundation expressed pleasure in helping his fellow Guyanese and said “we would love to continue to support the country.”

Lauding the initiative and the work of the Canadian- based foundation, Canadian High Commissioner to Guyana, His Excellency Pierre Giroux,  said “we are here to work and grow together… and we will continue to support Guyana… we have over 200,000 Guyanese living in Canada and multiplying there.”

Caribbean North Charities Foundation purchased and shipped building materials for the establishment of the unit in 2002, and has since continued to support its expansion with funding, equipment, training and educational materials, which have served thousands of Guyanese patients. 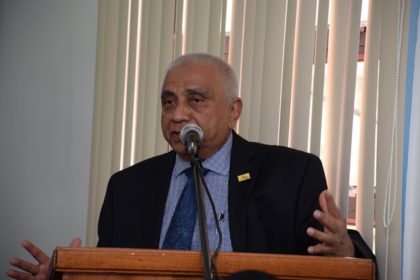 Harry Harakh, President of the Caribbean North Charities Foundation Guyana delivering his remarks at the handing over ceremony.

Caribbean North Charities Foundation is located in Richmond Hill, Ontario and was founded by Guyanese Harry and Pamela Harakh together with a few associates.
Over the past 17 years, it has engaged in several outreach programmes empowering institutions and care providers.