In a bid to cushion the impact of COVID-19 on constituencies across Georgetown, members of the Mayor and City Council (M&CC) pooled resources aid several city citizens.

His Worship Pandit Ubraj Narine via Zoom told DPI the hamper distribution exercise was initiated by the city’s elected officials. 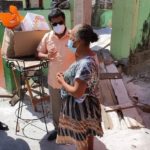 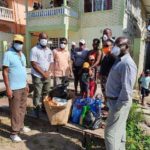 Some of the first hampers were distributed to the residents who suffered severe loss as a result of the April 11 Bent Street fire, as well as other vulnerable citizens throughout Georgetown.

The Mayor noted the relief exercise has been supported by the Georgetown Chamber of Commerce and Industry (GCCI). The private sector body has made frequent donations of hygiene products to the M&CC in addition to assisting with the building of handwashing stations around Georgetown.

Mayor Narine further credited Gafoors and Hamid Hardware business for bolstering the city council’s fight against COVID-19 with the handing over of water tanks for handwashing stations.

The Civil Defence Commission has spearheaded the distribution of relief hampers to vulnerable people since the emergency measures were gazetted in accordance with the Public Health Ordinance Act.