-to be funded by JICA 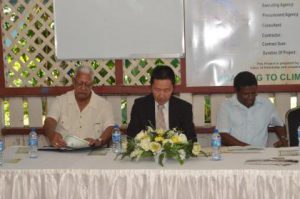 According to Chief Executive Officer of NDIA, Frederick Flatts, the more than $60Million equipment is due to arrive in July. “The excavator will be one that can operate both on land and in the water and will be used in the East Demerara Water Conservancy,” Flatts explained.

The two-phased EDWC project was aimed at procuring equipment and rehabilitating facilities for the improvement of the flood-control capacity of the conservancy.

Phase One of the project saw the acquisition of equipment critical to the maintenance of the conservancy. Among the items acquired were excavators, aluminum boats and engines, 4 x 4 trucks, GPS devices and laptops.

Phase Two was executed by the Ministry of Agriculture in collaboration with NDIA and scheduled for completion by March 2016.