Guyana attaches great importance to its relations with the United States

-President says at US independence celebrations

Georgetown, Guyana – (July 11, 2018) President David Granger, this evening, said that the Guyana attaches great importance to the relationship it shares with the United States of America, which have led to bilateral cooperation in economic development, education, entrepreneurship, justice-improvement, and defence and security cooperation since the establishment of formal diplomatic ties on August 15, 1966. The President was at the time speaking at a ceremony held this evening at the Marriott Hotel Guyana to celebrate the 242nd Independence anniversary of the United States, which was observed on July 4. 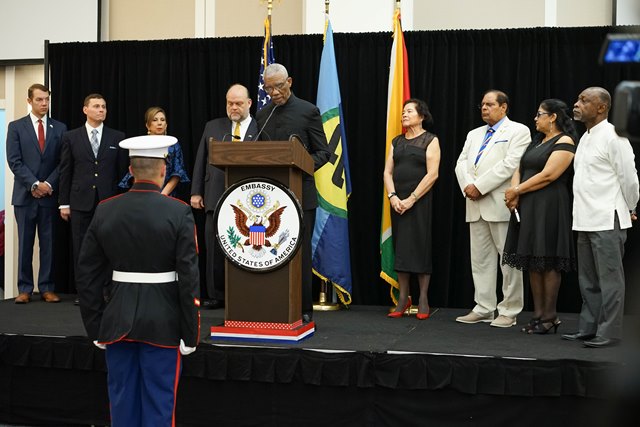 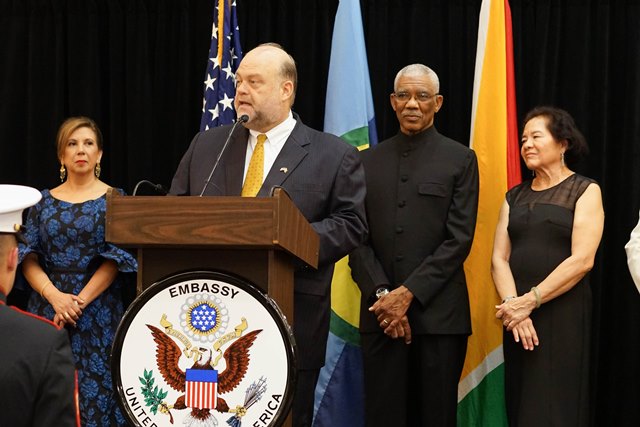 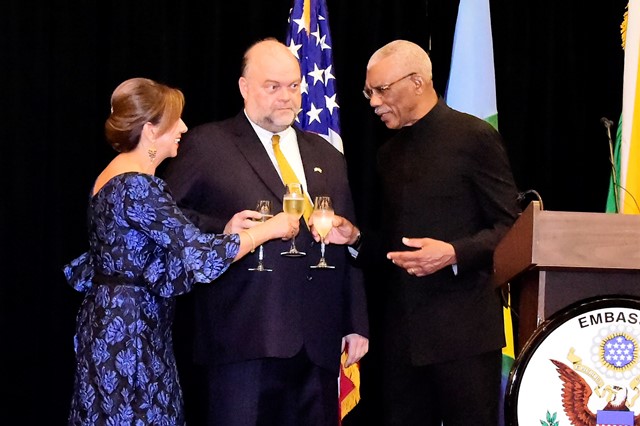 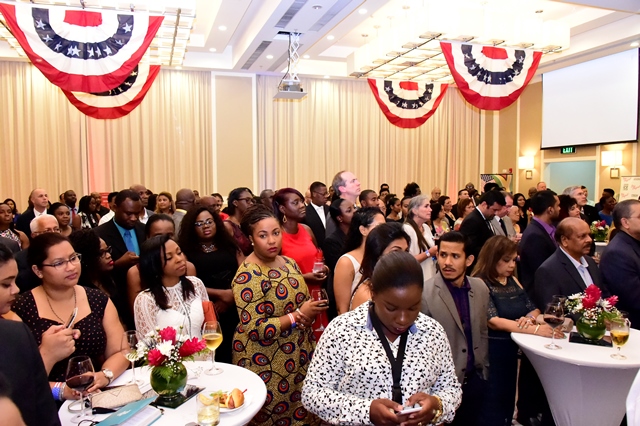 The President noted that Guyana’s Civil Defence Commission has benefitted immensely, particularly from the provision of equipment, machinery and training. The USA, he said, indeed, has been a friend in need.

“The catastrophic 2017 Caribbean hurricane season confirmed how destructive are the threats posed by extreme weather events to mainland America and to the small-island developing and low-lying coastal states of the Caribbean. Guyana looks forward to collaborating with the USA and other mainland states to mitigate the harmful effects of global warming and to provide relief to the victims of hurricanes and other natural disasters,” the Head of State noted.

He noted that the ‘Declaration of Independence’ was the philosophy for the establishment of a new nation in the new world of the western hemisphere and inaugurated a process of demographic change, geographic expansion and economic growth, making the United States of America today, one of the most cosmopolitan countries and technologically advanced economies on earth.

Meanwhile, US Ambassador to Guyana, Mr. Perry Holloway in his remarks, noted that the United States will continue to lend assistance to Guyana where necessary to enhance cooperation and strengthen the bilateral ties which exist. In this regard, he announced that the first ever American Chamber of Commerce will be established in Guyana in August to cater for enhanced trade and investment.

He noted that in spite of all the negative press, the angst and the uncertainty, Guyana’s future is brighter than ever before with the discovery of oil offshore. As the Government takes up the challenge of putting the appropriate systems in place to manage the sector, Mr. Holloway said that every Guyanese must also become involved in the process, particularly by educating themselves on the sector.

“This discovery of oil offshore is really big deal and everyone needs to take it seriously and get smarter on the issue because while the Government of Guyana is doing many of the things that need to be done, much more will need to be done. I know President Granger is committed to getting it right but he cannot do it all by himself, he needs the help of all Guyanese. If things go right and the right things are done, Guyana will be more secured, prosperous and inclusive. The US stands ready to assist but we will only be a catalyst to the enabler, the real work is for the Guyanese to do,” he said.