Georgetown, Guyana – (September 7, 2018) As Brazil celebrates its 196th anniversary of independence and 50 years of bilateral ties with the Cooperative Republic of Brazil, President David Granger, this evening, said that the ties between the two counties have never been stronger.

The Head of State was at the time speaking at a reception held at the house of the Ambassador of Brazil to Guyana, in honour of its 196thindependence anniversary. 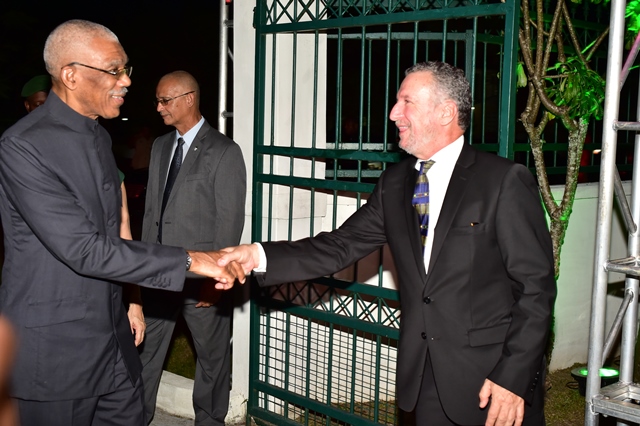 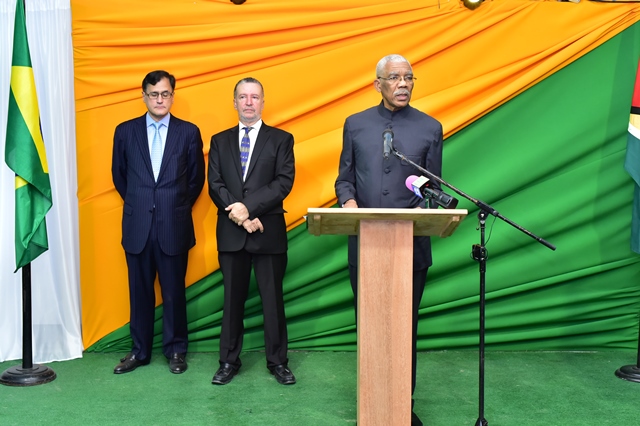 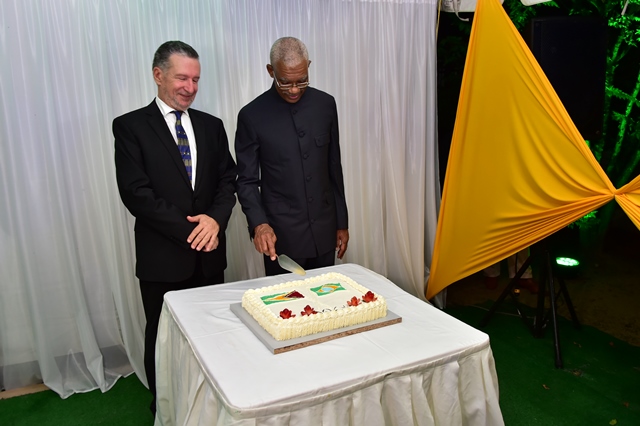 President Granger noted that Brazil’s Independence celebration this year is auspicious as it coincides with the 50th anniversary of the establishment of formal diplomatic relations between our two states. He noted that Guyana-Brazil relations are founded, most importantly, on mutual respect for each other’s territorial integrity and sovereignty, the inviolability of borders and international law and the maintenance of international peace and security.

“Guyana-Brazil relations were reinforced by bilateral talks with President Dilma Rousseff when I attended intensified over the past year. They have included: the Summit of the Common Market of the South in Brasilia in July 2015. High-level engagements have my meeting with President Temer on the margins of 72nd Session of the United Nations General Assembly in September 2017; my State visit to Brazil in December 2017 and the signing, during that visit of the two Complementary Agreements, of a high-level Brazilian delegation including then Minister of Defense, the Hon. Raul Jungman and Minister of Justice, Hon.  Torquato Jardim; my participation in the World Water Forum hosted in Brasilia in March 2018; and a visit to Guyana by Hon. Aloysio Nunes Filho, Brazil’s Minister of External Relations in July 2018,” President Granger said.

He noted that Guyana and Brazil are cooperating within the Union of South American States (UNASUR), the Community of Latin American and the Caribbean States (CELAC), the Common Market of the South (MERCOSUR) and the Organization of American States (OAS) to preserve Latin America and the Caribbean as zone of peace and the Guyana-Brazil relations have witnessed cooperation in agriculture, defence, education, energy, health, infrastructure security, sport, trade, transportation and water.

“Guyana continues to work closely with Brazil to advance infrastructural integration via the planned paved Mabura-Lethem Road. Guyana and Brazil share a common interest in preserving and protecting the Guiana Shield and in providing environmental services to the rest of the world. The Guiana Shield Initiative and the Amazon Cooperation Treaty Organization are important vehicles for protecting our valuable environmental resources.  Guyana-Brazil relations have never been stronger. The prospects for renewed cooperation and collaboration have never been brighter. Guyana and Brazil, yearly, are fortifying their long-standing friendship,” the President said.

Meanwhile, Brazilian Ambassador to Guyana, Ambassador Lineu Pupo De Paula in his remarks, echoed similar sentiments, as he noted that the cooperation between Guyana and Brazil has particularly intensified over the past three years, in a number of areas.

Moreover, he stated that Guyana can continue to be assured of Brazil’s support on the Guyana-Venezuela Border controversy.

“I think we have every reason to consider the last three years as one of the most important moments in our long relationship. We are countries that share common values and moreover, we have a large border between us. We are working hard. Brazil welcomes with satisfaction, the decision by the United Nations Secretary General to send the issue of the border controversy to the International Court of Justice. We affirm that the International Court represents the natural course for the settlement of disputes. Guyana can be assured that regional stability will not be shaken. One of the fundamentals of our foreign policy is the respect of international agreement and Brazil also defends the peaceful solution of controversies. Guyana knows that we are brothers, we are neighbours and we will follow the path of progress together,” he said.