―‘will propel Guyana forward to be a powerful nation’

“Guyana is celebrating its 50th Republic Anniversary on a platform that will propel it into the future as one of the richest and powerful nations in the world.”

This observation was made by Attorney General and Minister of Legal Affairs, Basil Williams, SC., at Region 4’s Regional Flag Raising Ceremony at the Beterverwagting Primary School on the East Coast Demerara on Thursday. 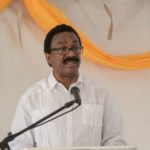 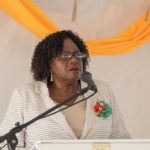 Members of the Guyana Police Force stand to attention as the Golden Arrowhead is hoisted.

Members of the disciplinary services during the march past.

Students of the East Ville Nursery performing a calypso song. 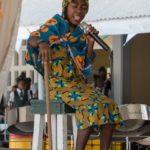 A student of the Plaisance Primary School performing a dramatic poem.

In his address, the AG opined that Guyanese are celebrating the prosperity that was promised to them 50 years ago.

“…We are realising the promise that we grew up hearing about and the future is so bright, it is so unfathomable. In another 50 years this country will be unrecognisable and will be on par with other developing countries in the world,” he stated.

AG Williams reminded that with the passing to the republican constitution in 1970 Guyana truly severed ties to its colonial past and was free to “charter its future.”

Pointing to the fact that Guyana is now an oil-producing country, the AG assured that funds from the sector will be placed in the Natural Resources Fund to be used to develop and advance the country and its citizens.

Reflecting on Guyana’s transformation since 1970, Demerara-Mahaica, Regional Chairperson, Genevieve Allen urged those gathered to imagine what the country will be in the next 50 years and how they can contribute to this change.

Highlighting the development of the region Allen noted some key …. among these the construction of President’s College in 1985; followed by the establishment of several nursery and primary schools in communities along the East Coast and East Bank Demerara and central Georgetown; new roads were constructed and existing roads upgraded and equipped with street lights; potable water distribution systems and electricity became available to households; drainage systems in the agricultural communities was vastly improved to reduce floods, and farmers continue to receive technical and other support to improve their crops.

“Guyana is poised for transformation. Let us come together in unity and continue to build this country,” Allen stated.

After a programme of song, dance and poetry, the Golden Arrow Head was hoisted at 12:00 noon by members of the Discipline Service in observance of Jubilee Republic anniversary.