20th August, Rio de Janeiro, Brazil: The Guyana Embassy to Brazil has been providing moral support to the players, management and staff of the Golden Jaguars who are currently on a historic “Train and Play” Camp taking place in Rio de Janeiro.

Recently, the First Secretary Jevon Rodrigues, representing Guyana’s Ambassador George Talbot, travelled from the Brasilia located Embassy to Rio and spent two days interacting with players and staff. At a simple function, Rodrigues conveyed the Ambassador’s best wishes to the team, informing them that Ambassador Talbot is an ardent Golden Jaguars’ fan and he wanted the team to be aware of that fact. 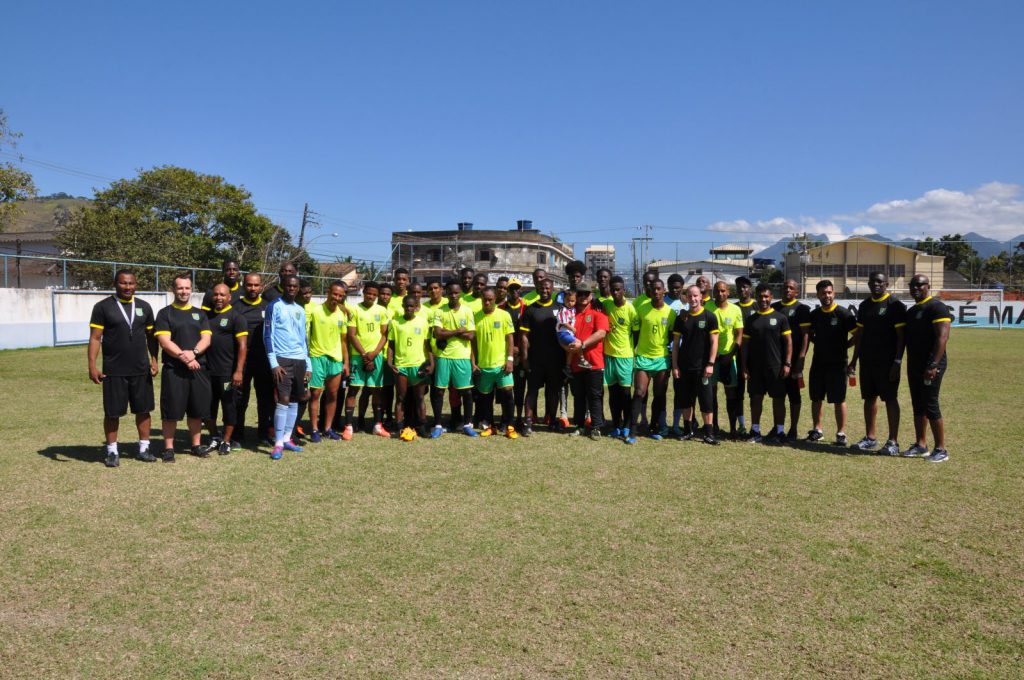 Jevon Rodrigues takes a pic with players and staff

“This encampment is historic as it is happening in a year when Guyana and Brazil are celebrating 50 years of diplomatic relations. Events to celebrate this milestone would be taking place in

Brazil and Guyana. I would like to wish the team and management, on behalf of Ambassador Talbot, the very best going forward and encourage you to be the best, work hard and the good results will follow.”

Rodrigues, a qualified former coach who once briefly served as the President for the West Demerara Football Association, also complimented the Guyana Football Federation for the initiative of having the camp in Brazil, which can only boost the sport in Guyana.

He also disclosed that an anniversary symposium would have already been done at the University of Brasilia and Roraima while there would be an exchange of cultural troupes between the two neighbours: “Later in the year we should issue some stamps to commemorate the event so I think a team coming here at this time is very significant. It may have taken us 50 years to bring a squad to Brazil but I think our development is getting closer to the level that Brazil is. My word to the players is, remain committed, remain disciplined and doors will open for you. I am excited about the new management and coach; the atmosphere is just positive and I really admire that. I know that we are going to go places.”