Guyana files its case with the International Court of Justice

Guyana has today submitted its Application to the International Court of Justice (ICJ) requesting the Court to confirm the legal validity and binding effect of the 1899 Arbitral Award regarding the boundary between Guyana and Venezuela.

The Application follows the decision of UN Secretary General His Excellency Antonio Guterres, in choosing the ICJ as the next means of resolving the controversy that arose as a result of the Venezuelan contention that the Arbitral Award of 1899 about the frontier between British Guiana and Venezuela was null and void. 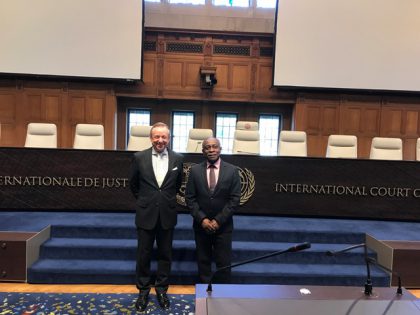 In its Application to the Court, Guyana highlighted that Venezuela had, for more than 60 years, consistently recognized and respected the validity and binding force of the 1899 Award and the 1905 Map agreed by both sides in furtherance of the Award. Venezuela had only changed its position formally in 1962 as the United Kingdom was making final preparations for the independence of British Guiana and had threatened not to recognize the new State, or its boundaries, unless the United Kingdom agreed to set aside the 1899 Award and cede to Venezuela all of the territory west of the Essequibo River, amounting to some two-thirds of Guyana’s territory.

Guyana’s Application notes that while Venezuela has never produced any evidence to justify its belated repudiation of the 1899 Award, it has used it as an excuse to occupy territory awarded to Guyana in 1899, to inhibit Guyana’s economic development and to violate Guyana’s sovereignty and sovereign rights.

The UN Secretary-General’s authority to choose the ICJ as the means for resolving the controversy is rooted in the Geneva Agreement of 1966, negotiated just before Guyana attained independence. On January 30th 2018, Secretary General Guterres concluded that the Good Offices Process, which the parties had engaged in for almost 30 years, had failed to achieve a solution to the controversy and chose the ICJ as the next means of settlement.

The Application was handed over to Mr Philippe Couvreur, Registrar of the ICJ by Honourable Carl Greenidge, Vice President and Minister of Foreign Affairs, who will serve as Guyana’s Agent in the proceedings before the Court.

According to Minister Greenidge, in filing its Application, Guyana has respected the Secretary General’s decision and placed its faith in the International Court of Justice to resolve the controversy in accordance with its Statute and jurisprudence, based on the fundamental principles of international law, including the sanctity of treaties, the maintenance of settled boundaries and respect for the sovereignty and territorial integrity of States.