The Aurora Mines of Canadian company, Guyana Goldfields Inc. has produced an estimated 75,000 ounces of gold for the first half of this year, a feat that has been commended by  Prime Minister Moses Nagamootoo.

The Prime Minister led a high-level team of Government Ministers on Saturday, to the company’s mining operations in the Cuyuni-Mazaruni. 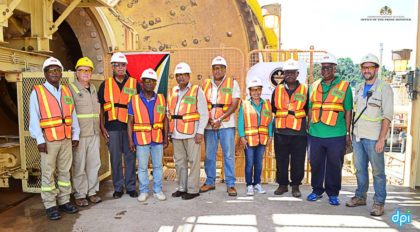 “Aurora Gold Mines is a very bright spot in the entire scheme of things in relation to how the economy will grow and be able to produce not only employment and growth, but social benefits to our people,” Prime Minister Nagamootoo said.

“This is good news for Guyana; I believe that anywhere you go and receive a report of production of 75,000 ounces of gold for the half year I think that’s excellent …I am very impressed with this visit of this mine. Aurora Gold Mines is doing well for the country,” the Prime Minister said.

The Prime Minister praised the company for its safety and environmental measures and processes whereby the ore is extracted and ground and turned into the final product. “The explanations convinced me that this is not only a safe operation, but this is also a worthwhile venture,” he said. 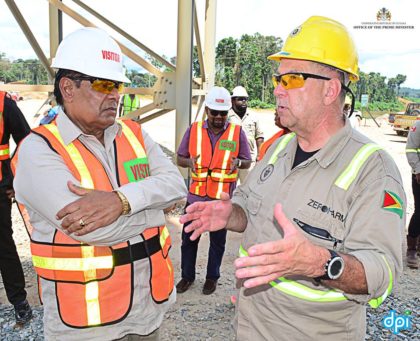 Prime Minister Moses Nagamootoo interacting with one of the executives of the Guyana Goldfields Inc, Aurora Gold Mine

The Prime Minister also highlighted that the company has over 500 employees on site who have performed 1,000,000 man hours of work without any break in service. This, he said demonstrates good methods of management and relationship with the workforce.

“This is an example of a good investment, the rewards are showing now and they are encouraging for new investors…there are plans in terms of expanding of production areas, in terms of producing alternative energy, accommodating the workforce in an environment that is more permanent, in terms of health considerations, security, and the supply of food,” the Prime Minister pointed out.

Prime Minister Nagamootoo further noted that gold, diamond and other minerals must be linked to the development of communities and sustainable livelihood and any company that wishes to come to Guyana with the same objective is welcomed. 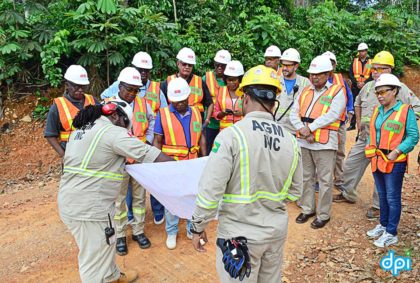 Minister Trotman said that Government is happy with the operation and production of the company. “It is surpassing even our targets because at the beginning we anticipated just about 100,000 ounces and it would appear that we will go beyond that for this mine alone because at the end of June they had already done close to 76,000 ounces so we are doing very well…the returns are good and this company is leading the way,” Minister Trotman explained.

He commended the company for its high safety standards, and expressed hope that the methods used will be replicated throughout Guyana.

Meanwhile, Minister Jordan noted that “Guyana is on the cusp for major transformation and now is the time to get in, particularly when, in the case of gold prices at a level where you can make an investment and get a decent return.” 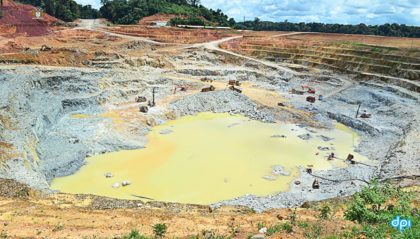 Jordan said that the returns to Guyana are fantastic, and while sugar is not doing well, rice had some slippages and bauxite is holding its own, gold has allowed the economy to continue to grow rather than regress. “All in all I think the future is golden,” the Minister of Finance said.

Foreign Affairs Minister Carl Greenidge said Government ought to assess first hand such operations, not only in terms of production, but the natural landscape and the effect the extractive sector has on the environment. “That is a dimension that is very important for the Government. International agencies’ bilateral representatives are interested to know what is going on, and the effects on the landscape,” Greenidge pointed out.

Guyana Goldfields Inc. achieved the first gold pour in August 2015. The mine plan for the company is designed to produce 2.86 million ounces of gold, averaging 188,000 ounces per year, over an initial 16 – year mine life.