The Guyana High Commission in London, in collaboration with members of the diaspora, coordinated a series of events to commemorate Guyana’s 50th Republic Anniversary.

The launch was held on Thursday, February 20, 2020, and hosted by the Commonwealth Foundation at the Commonwealth Secretariat, Marlborough House, under the theme, ‘Reflect, Celebrate and Transform’.

The evening included opening remarks from Acting High Commissioner, Ms. Peggy McLennan. Prominent Guyanese personalities residing in the United Kingdom, Mr. John Agard and Mr. Trevor Phillips, shared their unique interpretations and reflections on Guyana’s evolving socio-cultural construct provoking nostalgia in the audience and providing food for thought. They were both in Guyana when it became a Co-operative Republic. 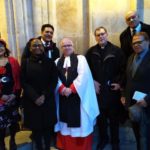 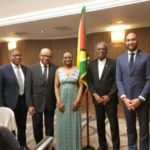 Mr. Agard is a distinctive poet; his poems combine acute social observation with a riotous imagination to thrilling effect while Mr. Phillips is a writer and television producer.  He co-founded the data analytics consultancy ‘Webber Phillips’ and is Chairman of ‘Green Park Interim’ and ‘Executive Research’.

On Saturday 22 February, the eve of the Republic Anniversary, members of the diaspora were joined at a cocktail and dinner party by a number of High Commissioners and Representatives of Caribbean Community (CARICOM) Missions in London under the theme ‘Guyana together’.

During her remarks on this occasion, the Acting High Commissioner invited the diaspora to become more actively involved in the development of Guyana.

On Monday 24 February 2020, the Guyana High Commission and members of the diaspora were invited to an ‘Evensong’ at Westminster Abbey.  The second lesson was read by the Acting High Commissioner and the service also included prayers for the leaders, Government and people of Guyana.