Guyana is the beneficiary of a mentoring exchange programme with Uganda. This was facilitated by Chatham House’s New Petroleum Producers Group.

“Uganda was chosen and approved as a suitable mentor for Guyana having recently completed its preparation for oil production set to begin in 2017,” Minister of Natural Resources Raphael Trotman pointed out. 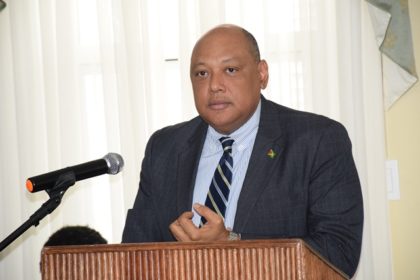 The Minister was at the time speaking at a Chatham House seminar on Thursday at the Cara Lodge, Quamina Street, Georgetown.

Guyana will seek to draw from the “unique and open exchange programme” as it prepares for oil production with the next five to seven years. The Ministry of Natural Resources has been working with international partners to develop the sector in time for producing the high quality crude oil.

The relatively low oil prices on the world market afford Guyana the chance to wisely and prudently develop the oil and gas sector, Minister Trotman noted.

“We have entered the petroleum industry at a conservative and watchful time, when literally every cent matters more than ever. Our focus therefore, is directed into deliberate considerations of the possible returns on such an investment, and how to maximise them for the benefit of our nation,” Minister Trotman said.

Last year, commercial quantities of oil were discovered off the Stabroek Block which is currently being explored by oil companies such as ExxonMobil and Hess Corp. Hydrocarbons found in the block are estimated to be within the range of 800M to 1.4B barrels of high quality crude oil.

International crude oil prices are trading at just around US$50 a barrel. Minister Trotman said consideration has to be placed on how to stretch Guyana’s dollars to ensure effective management of the emerging sector. “The government has embarked on a process of resource management that will recalibrate our performance and change our trajectory to better align her nation with her destiny,” Minister Trotman pointed out.

Directing oil windfalls towards productive investments in physical and human capital is one way to generate long-term sustainable and equitable growth of the oil and gas sector and ensure effective management, the Minister further stated.