Guyana is a democratic nation and intends to remain so -Dr Riyad Insanally.

Guyana’s Permanent Representative to the Organization of American States (OAS), Dr. Riyad Insanally has firmly stated that “Guyana is a democratic nation and intends to remain so”.

Dr. Insanally spoke on Wednesday, during a meeting of the OAS Permanent Council. 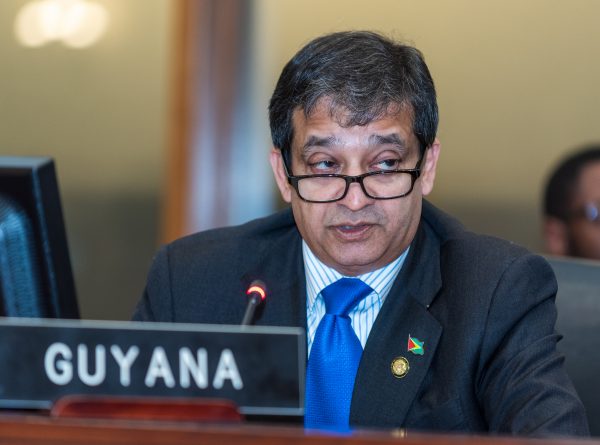 Dr. Riyad Insanally Guyana’s Permanent Representative to the Organization of American States delivering remarks during a meeting of the OAS Permanent Council

His remark came after former Prime Minister of Jamaica, the Hon. Bruce Golding, who was the Head of the OAS observer mission to Guyana for its March 2, General and Regional Elections, reported alleged fraud during the elections.

Mr. Golding, while presenting his report, departed from his prepared statement to add further comments to his claims.

Nevertheless, Guyana’s Ambassadors to the OAS thanked the observer mission for its presence in Guyana for the March 2nd Elections.

“We thank the Chief of Mission, former Prime Minister of Jamaica, Most Hon. Bruce Golding for his report. Likewise, we thank Secretary-General Luis Almagro and officials of the General Secretariat, in particular, the department of electoral corporation and observation for their support of our electoral process and their engagement during a difficult time for our country,” Dr. Insanally stated.

Adding that, as recognized by the OAS Elections Observer Mission and other international observers, the general and regional elections on March 2nd 2020 was free, fair and orderly and conducted according to the laws of Guyana.

Dr. Insanally acknowledged that after March 2nd, there were developments regarding the elections which caused a delay in an official declaration of the results and lead to His Excellency President David Granger and the Leader of the Opposition, Bharrat Jagdeo, agreeing to a recount of votes cast in the elections, with a CARICOM team leading the observation process.

However, he noted that the process was delayed further by legal challenges which have now added significantly to the jurisprudence related to Guyana’s electoral laws and procedures, and which serve the purpose of removing legal impediments to the recount. 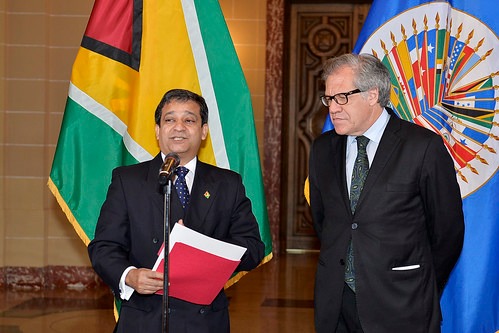 “This is evidence Mr. Chairman, that Guyana remains governed by the rule of law, with full respect for the separation of powers and the independence of the judiciary. Indeed, there has been no breakdown in the rule of law or public order in Guyana.”

He urged the OAS to note the following facts; that the electoral process is managed by the Guyana elections commission (GECOM), that it is an independent body constitutionally charged to conduct and supervised the elections and that the executive branch of government has never tried to influence, interfere with or instruct GECOM.

“The President attempted, with the agreement of the Leader of the Opposition to find a way forward by inviting CARICOM to support a recount by GECOM. At all times the executive branch, GECOM and indeed all stakeholders have been respectful of the rulings of the courts,” the Guyana Ambassador stated.

He said while the electoral process is not yet complete, once the recount is finalised, the results will be cleared in accordance with the law, paving the way for the swearing-in of a president. This he noted has been repeatedly stated by President Granger.

Dr. Insanally also made clear that in spite of COVID-19, the recount has begun.