GEORGETOWN, Guyana, October 25, 2017 – Guyana is now officially the 53rd candidate country of the Extractive Industries Transparency Initiative (EITI). Guyana’s application to become a candidate country was deliberated upon during the 38th Extractive Industries Transparency Initiative Board Meeting which is being held in Manila, Philippines from October 25 to 26, 2017. Guyana was invited to the meeting as observers. This is a signal achievement for all Guyana as it strengthens the good governance framework that the APNU/AFC coalition government has committed to establishing for the extractive industries sector and beyond.

Honourable Raphael G.C. Trotman M.P., Minister of Natural Resources along with National Coordinator of the Guyana EITI Secretariat Dr Rudy Jadoopat were invited to the meeting as observers. However, Minister Trotman chose to have a representative from Civil Society attend in his place. In that regard, Co-Chair of the Multi-Stakeholder Group (MSG) representing Civil Society Mr Curtis Bernard accompanied Dr Jadoopat to the meeting.

Brief background of EITI in Guyana

Minister Trotman said: “I am elated that Guyana’s candidature application has been accepted. I see this as the fruit of an inclusive and committed process of shared governance…a process in which Government, Industry and Civil Society have worked together to deliver a nationally beneficial result. I congratulate all stakeholders who worked assiduously to ensure a timely submission of the application that met the EITI Secretariat’s standards and expectations.”

Now that Guyana is a candidate country, we will have 18 months from the date of candidature to publish our first EITI report with information relevant to the extractive sector. That report will be prepared by an independent administrator.

Once a country becomes a member of EITI it must be assessed against the EITI Standard in a process called Validation which reviews the country’s progress against the EITI Requirements, evaluates the impact, and makes recommendations for strengthening the process and improving the governance of the natural resources sector. The country is re-assessed anywhere between three months and three years depending on the outcome of its Validation. This encourages continuous improvement and safeguards the integrity of the EITI.

Through the EITI Secretariat, the EITI Board oversees the Validation process and if warranted, ascribes the country as having made satisfactory progress, meaningful progress, inadequate progress or no progress. An implementing country’s first EITI Report must be published within 18 months from the date that the country was accepted as an EITI candidate country and Validation is required to commence within two and a half years of becoming an EITI candidate country.

The Secretariat is imploring all citizens, Government officials and companies to visit the Guyana EITI website at gyeiti.org where they will find Guyana’s work plan, Guyana’s candidature application and a list of members of Guyana’s Multi-Stakeholder Group (MSG) among other details. They can also visit the international EITI website at eiti.org. 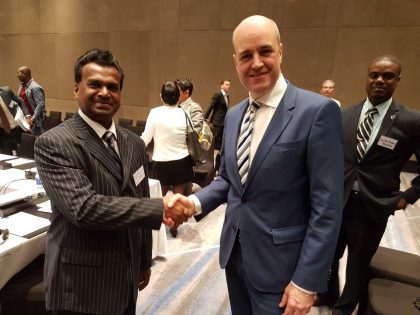