Prime Minister of Jamaica, The Most Honourable Andrew Holness today expressed optimism about the future economic prospects for Guyana during a courtesy call to Prime Minister Moses Nagamootoo.

“(Guyana) has (vast amounts of) land, minerals and we have recently received news of the oil find. I get the sense that Guyana is on the cusp of a boom period,” Prime Minister Holness told Prime Minister Nagamootoo during the hour long courtesy meeting at the Office of the Prime Minister.

Prime Minister Nagamootoo thanked Prime Minister Holness for his optimism about the future prospects of Guyana and later remarked that such a positive outlook from a highly respected regional leader lends credence to the view that Guyana is on the desirable developmental path. 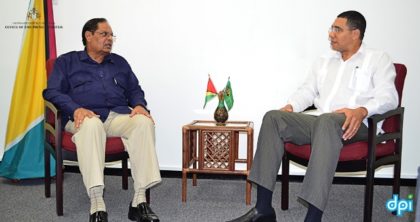 Prime Minister Nagamootoo commended Prime Minister Holness on his assumption to office following the recent elections in Jamaica and the two leaders engaged in general discussions on a wide range of topics.

Prime Minister Nagamootoo noted the close ties the two countries have shared since independence in the 1960s and expressed a desire to see closer cooperation in areas of mutual interest and to foster stronger bonds within CARICOM.

In this regard Prime Minister Nagamootoo shared with Prime Minister Holness plans of the Coalition Government, through the Ministry of Business and GoInvest, to allow for a smooth process for potential CARICOM and international investors. 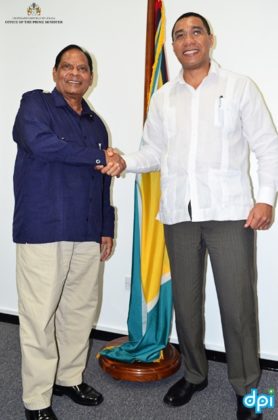 The two leaders are scheduled to meet again later this evening at the Guyana National Stadium to view the Caribbean Premier League match between the Guyana Amazon Warriors and Jamaica Tallawahs. Prime Minister Holness noted that cricket is a “symbol of Caribbean unity” and that the people of the region looked to governments with regard to the management of the sport.

“It is difficult for a private organization to manage cricket for the public good but I see the role of governments as being more supportive,” Prime Minister Holness posited.

The Jamaican Prime Minister said that he believes that the West Indies Cricket Board recognizes the concerns of CARICOM.

Prime Minister Holness has just concluded attending the 37th Meeting of the CARICOM Heads of Government held in Georgetown on July 5th and 6th.