In an effort to  coordinate relief for Guyanese nationals affected by Hurricane Irma a Guyana Needs Assessment Team today met with the Guyanese community in St Maarten. The group will travel to Tortola in the British Virgin Islands tomorrow to execute a similar mission.

The Team was warmly received by the Guyanese community despite the difficult circumstances.

Since their arrival, the officials have met with the members of the Guyana Association established in St Maarten. An estimate 7000 Guyanese reside on the island which was ravaged by the category 5 hurricane.

The hurricane caused severe damage to most of the island and the rebuilding process has commenced. Schools are expected to be reopened on October 2, while commercial flights are set to become operational on October 1. Military support is being offered by both the Dutch and French Governments.

Communication with relatives in Guyana has proven challenging for Guyanese nationals on the island with no internet connectivity and limited telephone service. Also only one of the sixteen radio stations there is functioning. Additionally, despite the roofs of houses having been blown off, persons have managed to secure accommodation in their homes with the use of tarpaulins. Schools are also being used as shelters. The Guyanese Association officials shared with the Needs Assessment Team that they need help with basic food items, water and tarpaulins, these being their more immediate needs. 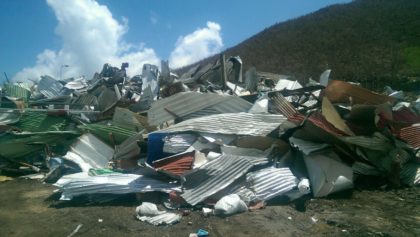 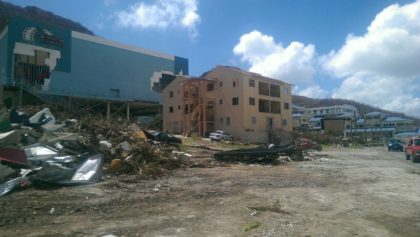 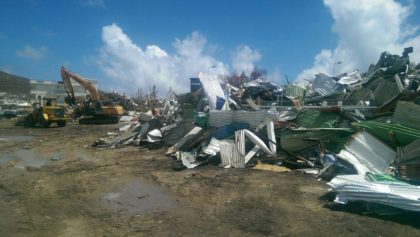 Sixty-five percent of the vehicles on the island are said to be damaged, according to Guyana Honorary Consul to St Maarten Cleavland Beresford. Fuel has also begun reselling there today and the normal use of vehicles is being restored, despite the major cleaning up that is taking place.

The team learnt that the main focus for the Islanders is to rebuild rather than to evacuate and this is currently in progress.

In the meantime, arrangements were today put in place by Caribbean Airlines to evacuate those who wish to return home. According to information received, Caribbean Airlines offered free evacuation flights –  for today only –  from Princess Julianna International Airport, which is situated on the Dutch side of the island, to Piarco International airport in Trinidad. However, those wishing to go further will have to face their own expense. A number of Guyanese have so far opted to join the flight.  Charter flights are still operational, while commercial flights have been temporarily halted.

Despite all that has taken place, the Islanders are reportedly in good spirits and are looking forward to rebuilding. Persons told the Needs Assessment Team that they are optimistic of the future despite the extensive damaged caused by Irma.

Guyanese there have expressed their satisfaction and gratitude to the Government for sending in the Needs Assessment Team. Nationals were elated to have officials on the ground for Guyanese nationals to convey their thoughts and experiences in person. Minister of Citizenship Winson Felix is expected to join the team tomorrow for the next round of analysis in Tortola.