The Ministry of Natural Resources aims to submit its application for membership to the Extractive Industries Transparency Initiative (EITI) in November.

Ana Maria Rodriguez, a consultant from the World Bank, is in Guyana assisting the ministry to establish a Multi-stakeholder Group (MSG). Rodriguez will be providing technical support on the process for creating the MSG and advancing the preparation, once the MSG is established, to draft a work plan.

In an interview with the Government Information Agency (GINA), Rodriguez said that she will be assisting stakeholders to, “understand the process in order to accommodate that process to the context of the country so that they can actually prepare for the candidacy for EITI and come up with a good work plan that is going to be helpful for the country”. 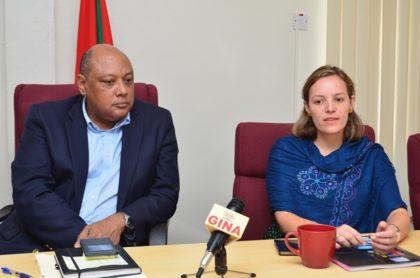 Rodriguez explained that EITI is a good tool to generate public dialogue and trust within the sectors. “I think EITI is a great start to set up the table, create dialogue between the three sectors that most of the time they are not sitting down at the same table and being informed and asking questions about the transparency,” Rodriguez said.

The EITI is a global organisation of 51 member countries, which have subscribed to establishing, upholding and promoting the standards and tenets of good governance, transparency and accountability in the management of extractive industries. At its core the EITI promotes the belief that natural resources belong to the people and are to be extracted and managed on behalf of the people; both for current and future generations. The MSG consists of a tripartite of government, civil society and industries stakeholders. Establishing a MSG is an important requirement of EITI.

Meanwhile, The Ministry of Natural Resources will be hosting a National Symposium on Wednesday to engage stakeholders in the process of creating the MSG. Rodriguez is expected to guide the process of selecting representatives of the MSG.

Minister of Natural Resources, Raphael Trotman, said the symposium is a, “good start” towards reinvigorating interest in EITI. “We wouldn’t be expecting that everything would be completed at the symposium on Wednesday , it’s the process of taking us toward membership and then, having attained membership your job is now starting in a sense because, you then have to ensure that you submit declarations,” Trotman said.

Minister Trotman noted  that he would like to see the standard in place before Guyana begins oil production. “It would be good for us to put this standard in place by having our membership sorted out and accredited so when we start to benefit from the revenue from oil we would (have) already been subscribing to that standard and being transparent and open,” Trotman said.

In its quest to embrace good governance standards in the regulation of the extractive industries, Guyana has been receiving guidance and support from the EITI’S Norway based secretariat and the Trinidad & Tobago Chapter (TTEITI).

Guyana had reaffirmed its commitment to join EITI  at the world summit in Peru last February.