– Public infrastructure to be major focus

Minister of Foreign Affairs, Mr. Carl Greenidge and Chinese Ambassador to Guyana, Mr. Cui Jianchun, today, signed a Memorandum of Understanding (MoU) between the Government of the Cooperative Republic of Guyana and the Government of People’s Republic of China on cooperation within the Framework of the Silk Road Economic Belt and the 21st Century Maritime Silk Road Initiative. This MOU is expected to see enhanced cooperation in five main areas such as policy coordination, facilities connectivity, trade and investment, financial integration and people to people interaction. Public infrastructure is also expected to be a major focus under this agreement.

At a simple ceremony held at the Chinese Embassy in Georgetown, which was attended by President David Granger, Prime Minister Moses Nagamootoo and other Ministers of the Government; Minister Greenidge said that the signing of the MoU is further demonstration of the two countries’ commitment to further strengthening the ties of friendship and cooperation, which have characterised the relationship between the countries since the establishment of diplomatic relations in 1972.

“As both Guyana and China look forward to fulfilling their obligations of enhancing and providing greater opportunities for our people, this initiative provides us with another opportunity to look beyond our immediate vicinity and our historic relations with the traditional metropolis to the vast political and economic space that lies also in the east and elsewhere.  I am therefore confident that these areas of cooperation could be a conduit through which the Government of Guyana with the assistance of your Government could provide some impetus for the continued diversification of our economy. In this regard, we eagerly look forward to the operationalisation of this MOU as the relations between our two countries continue on a positive trajectory,” he said.

With one of the top priorities being infrastructural development for this administration, Minister Greenidge said that the Government is looking to explore projects under the agreement that can build on this priority.

“One of the preoccupations of the Government and one of the preoccupations of the populace has to do with the area of infrastructure. The inadequate infrastructure in Guyana has served as a deficit to the attraction of investors and economic operators and it also serves as a constraint to identification and access to markets so one of our main priorities at this time is to work on the development of infrastructure. That would include a system for designs of roads and harbours and the like as well as access to funding for the construction for such facilities. Through the Road and Belt initiative, the Chinese have made available over $50 billion in funds for the whole region to utilise in pursuit of agreement and initiatives among states of Latin America and the Caribbean, so we are looking at a range of projects,” he said.

The Minister of Foreign Affairs hinted that there exists a possibility that the Linden-Lethem highway, particularly the Kurupukari to Lethem phase as well as the new proposed Demerara Harbour Bridge could be financed under this initiative.

“We have been speaking to all bilateral and multilateral partners. During our discussions with the Brazilians, we did discuss and explored the possibility of using funding from the Latin America China Funds to fund the road. That is something very much on the cards and something we are working on,” Mr. Greenidge noted. 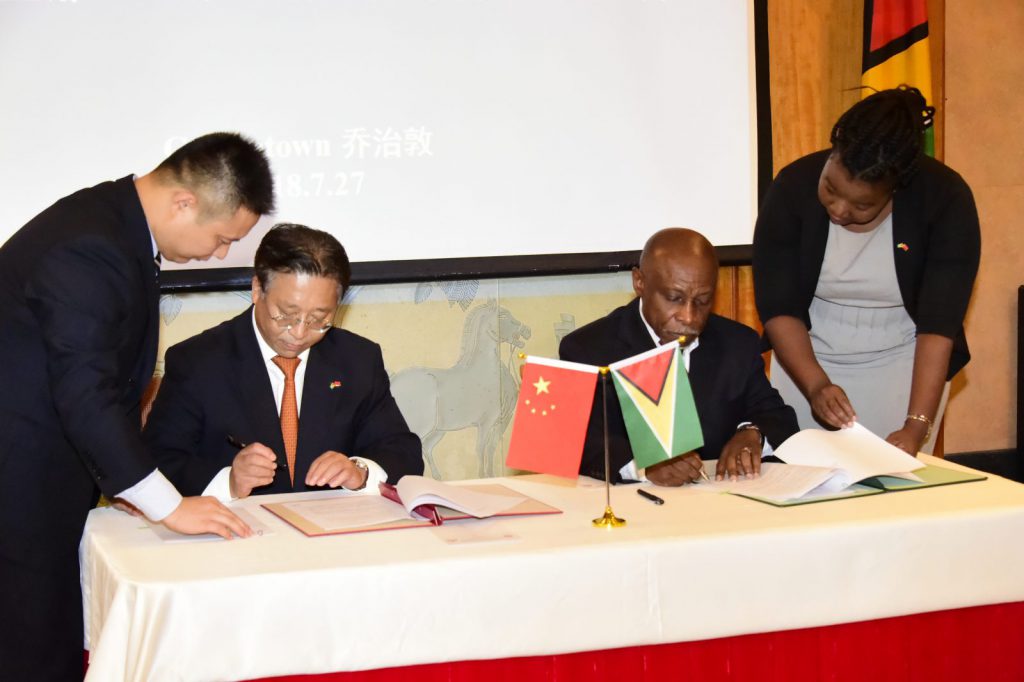 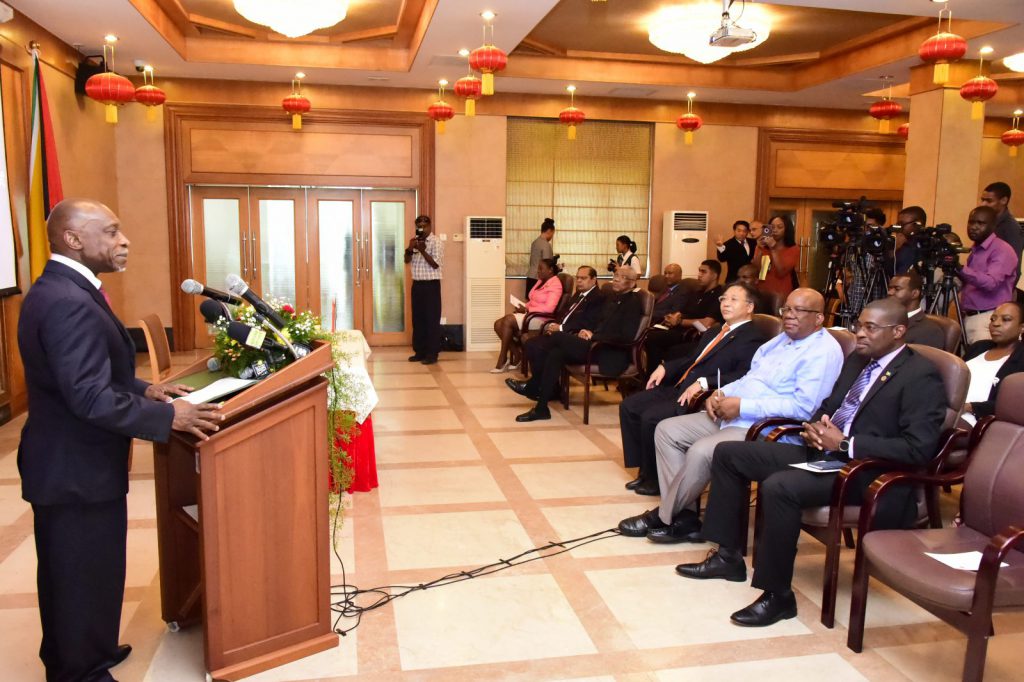 Meanwhile, Chinese Ambassador, Mr. Jianchun, in his remarks said that today marks a new and promising chapter to the bilateral relationship enjoyed by the two countries as it will bring mutual benefits and a brighter future for the two countries. He noted that the ancient ‘Silk Road’ embodies the spirit of peace, cooperation, openness, inclusiveness, mutual earning and mutual benefit and it is his hope that this will continue to characterise the relations shared.

“The glory of the Silk Road shows that geographical distance is not insurmountable. This new step is out of the initiative proposed by the Chinese President, Xi Jinping. Guyana is the first English speaking country in South America to sign the document. The belt and road initiative is a great undertaking, which requires dedicated efforts. Let us pursue this initiative step by step to deliver its achievements one by one. By doing so, we are confident that we will bring tangible benefits to our two peoples and nations,” he said.

The Belt and Road Initiative refers to the Silk Road Economic Belt and 21st Century Maritime Silk Road, a significant development strategy launched by the Chinese government with the intention of promoting economic co-operation among countries along the proposed Belt and Road routes. The Initiative has been designed to enhance the orderly free-flow of economic factors and the efficient allocation of resources. It is also intended to further market integration and create a regional economic co-operation framework of benefit to all.

The initial focus has been infrastructure investment, education, construction materials, railway and highway, automobile, real estate, power grid, and iron and steel. Already, the Belt and Road Initiative has been listed as one of the largest infrastructure and investment projects in history, covering 73 countries, now a total of 74 with the addition of Guyana as well as 28 international organisations.