Minister of Justice and Police of Suriname, Dr. Jennifer Van Dijk-Silos who is currently in Guyana ahead of the inaugural Hague Convention Conference that opens today, believes Guyana and Suriname can work closer to tackle cross-border issues.

Speaking with the Government Information Agency (GINA) at the Pegasus where the conference will be held, the Surinamese Minister said that Guyana and Suriname working together will be powerful.

“We both have a lot of resources, and together cooperating in an economic way regarding the resources we have, we will be the Dubai of South America… we have to see that, develop a concept of development of both countries and how we will do it,” Minister Van Dijk-Silos explained. 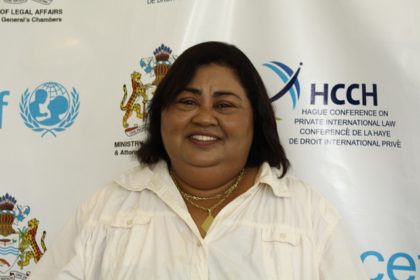 Noting that Guyana and Suriname both have ties through the regional bloc CARICOM, she said she intends to use her portfolio to leverage a deeper level of collaboration between the police, and the fire services of both countries to solve cross- border crimes.

“Regarding the free movement of people and goods from Suriname and Guyana, it is necessary that we have to cooperate closely as countries…I will be meeting with Minister of Legal Affairs, Basil Williams and Minister of Public Security, Khemraj Ramjattan,” Minister Van Dijk-Silos explained.

Cooperation between the two countries will not be limited to the field of justice, but will be extended between to University, its students and lecturers.

“I believe if the two corps can work together closely with this movement…we will have a lot of success in solving some criminal deeds that are cross bordering criminality… we have to look at the backtrack, also how will we formalise that… I have to reach a very active cooperation again among the police force, fire department, legal affairs and I want to discuss the three-country project on legal affairs that has to be funded through the EU –CARIFORUM,” she explained.

Whilst strengthening collaborative efforts with Guyana is high on the agenda, Suriname hopes that a Caribbean Centre of Children’s Rights can be established.

This position is taken by the Minister of Justice and Police because she realised that children’s rights are neglected, not only in Suriname, but also in other Caribbean countries.

“If you realise that children are the future population of a country, it makes it necessary to develop a sustainable policy on how to protect your children, how you raise them, how you implement their rights,” Minister Van Dijk-Silos said.

Whilst Suriname is a signatory to the Hague Conventions on Children’s Rights, the absence of a Children’s Rights Centre with executive authority thwarts the efficiency at which its measures can be implemented.