− Gets full support from member countries

Guyana’s acceptance of the Chairmanship of the Group of 77 and China in the same year it celebrates the Golden Jubilee of its Republican status is of great pride to every Guyanese.

This is according to the Honourable Moses Nagamootoo, Prime Minister of the Co-operative Republic of Guyana, as he officially took over the Chairmanship of the largest United Nations coalition of countries on Wednesday.

Prime Minister Nagamootoo stated that while a small country, Guyana has been determined to strengthen democratic norms and to realise higher levels of prosperity, cohesion and progress for its citizens. 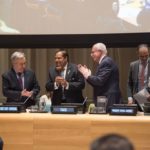 Hon. Moses Nagamootoo, Prime Minister of the Co-operative Republic of Guyana, assumes Chairmanship of the Group of 77 and China. 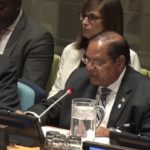 Hon. Moses Nagamootoo, Prime Minister of the Co-operative Republic of Guyana, assumes Chairmanship of the Group of 77 and China.

He also expressed words of gratitude to Palestine, the outgoing Chair.

“I wish to pay tribute to the historic and heartening work of the State of Palestine as Chair in 2019. Guyana has been deeply impressed by the great dedication and commitment to service demonstrated by Palestine in discharging its responsibilities even in the midst of greatly challenging national circumstances.”

Calling the session to order as its official Chair, PM Nagamootoo listed the challenges of climate change, hunger, disease and poverty among areas that are likely to test the core of the G77.

“Excellency as we meet today, the international situation gives increasing cause for concern. Notwithstanding the Paris Agreement and SDGs, many developing countries continue to grapple with the plethora of grave challenges, with the respect of the ravages caused by climate change, poverty, hunger and disease. There is a deepening trust deficit in multilateralism as well as inadequate means of its implementation, including financing, trade, technology transfer and capacity building. On the other hand, the year 2020 is already full of significant undertakings and challenges that will test the mettle of the G77,” PM Nagamootoo cautioned.

According to the PM, nothing short of a strong, credible and focused G77 will enable the group to equal the demands of the times.

“For this reason, it is to these core imperatives of working for a strong, credible and focused G-77, to which our energies as Chair will be dedicated. We envisage that during 2020, we can preserve and enhance the image and character of our Group as the largest negotiating bloc within the United Nations,” he stated.

The Group of 77 and China is a coalition of 135 developing nations set up to promote its members’ collective economic interests and create an enhanced joint negotiating capacity in the UN.

Guyana’s Chairmanship of the G77 for this year has received full support from member countries even as Venezuela accused Palestine of breaching procedures in advancing Guyana’s candidacy.

Groups from Latin and Central America, Asia, Africa and the Pacific have all endorsed Guyana’s Chairmanship and pledged their support. India, Bangladesh, Sri Lanka, Nicaragua, Costa Rica, Argentina and Lebanon have also sounded their support.

“Excellencies, ladies and gentlemen, I congratulate the Cooperative Republic of Guyana for its election as Chair of the Group of 77 and China, and look forward to continue engaging with the newly elected chair and members the group throughout the resumed session.” … “Guyana’s leadership will be critical to preserving and advancing the interest of the G77 and China and progressing all elements of the development agenda.”

“I also congratulate Guyana as it assumes the Presidency of the coming year and wish to assure you of the continued support of the Secretariat and my office.”

As Palestine handed over the chairmanship to Guyana, Foreign Affairs and Expatriates Minister, Riyad al-Malki, expressed his confidence in Guyana’s ability to chair the G77 and China group.

“The State of Palestine received the baton from Egypt and today passes the baton to Guyana, embodying the uninterrupted chain of a joint endeavour that started 55 years ago and that is more relevant today than ever.”