Guyana will be hosting the Inter Guiana Games October 21 – 23, 2016.  The games will feature athletes from Guyana and neighbouring country Suriname. 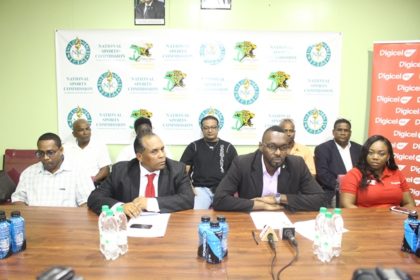 Basketball, volleyball, badminton, futsol, table tennis, swimming and track and field are among the disciplines set to be played. The tournament will feature youths who were born in 1997 or later. The games will be held at different locations including the National Gymnasium, Cliff Anderson Sports Hall, Lenora Track and Field and the National Aquatic Centre.

Director of Sports, Christopher Jones, at the press conference yesterday, at the National Sports Commission Board Room, Homestretch Avenue, called on the Guyanese public to attend the games.

Jones noted that entry to all games is free and that the games were strategically placed and set so that everyone could get a chance to witness the talents that Guyana has.

Additionally, the Director of Sports explained that steps are being made to have the games streamed live. “An agreement and an arrangement is being had with E-Networks which will see the realization of live streaming from the Cliff Anderson Sports Hall,” Jones explained.

Jones further said that experiments are being carried out to also have the games streamed from the Leonora stadium and from the National Aquatic centre.

Chairman of the of National Sports Commission, Ivan Persaud, speaking at the press conference said that games between Guyana and Suriname gives Guyanese athletes an opportunity to participate in an international tournament.

“Other than our national school championships, we have very little for our amateur athletes to actually fend against opponents from other countries,” Persaud explained.

The Chairman said that he is thankful for the associations that are providing teams that are capable of winning the tournament for Guyana.

Several sponsors have already come on board to help make the games possible. They include, Digicel Guyana, Banks DIH, Rainforest waters, E-Networks and Impressions.