The meeting which was held in the Boardroom of the Ministry’s Regent and Shiv Chanderpaul Drive office was centred around ways in which Guyana can strengthen its relationship with the two nations in the agriculture sector.

Minister Holder indicated that there is a great need for an all-weather road to be built from Guyana to Brazil so that trade can be facilitated. “With this in place, Guyana stands to benefit highly from export markets to and through Brazil.” Minister Holder said.

Guyana was declared free of Fruit Fly by the IICA and also stands to gain in its cattle industry as was also declared free of Foot and Mouth Disease. Brazil is currently working on becoming free of this disease. Once this is achieved, Guyana would be able to tap into exporting beef through Brazil.

Also present in the meeting was the Permanent Secretary for the Ministry of Agriculture, Mr. George Jervis. He indicated that there is a great need for collaboration with the Brazilian Agricultural Research Corporation (Embrapa) as it is critical to Guyana’s agricultural development.

As it relates to Europe, Ambassador Hales enquired about cashew nut cultivation. Permanent Secretary Jervis however informed His Excellency that investors did small trials but the industry was not further explored. He, however, indicated that the government does not intend to block persons desirous of taking up cashew nut cultivation.

Both ambassadors express readiness to lobby for investment opportunities coming into Guyana to develop the industry.

Some of the areas the ambassadors will be seeking investments for, as it relates to the agriculture industry, are topography and soil mapping technology, investment for the Brazil to Guyana all weather road and general advanced technological input into cultivation practices. 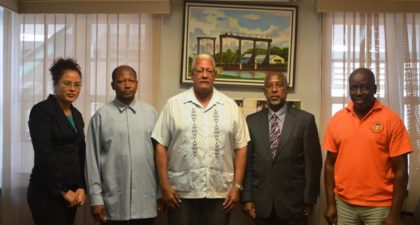