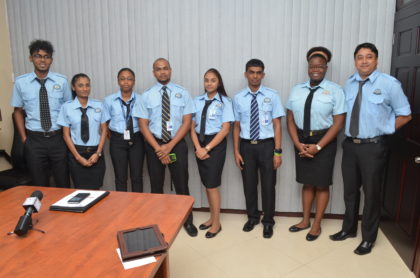 Director General of the GCAA, Egbert Field, addressing media operatives at a press conference today, at the GCAA’s Kingston Office, said that the officers performed exceptionally well. “You have really done us proud. I am very happy. People like you, family members like you are who I am striving to get, who I am striving to help us move this authority onward and upward.”

The Director General was loud in his praise for Guyanese student Devindra Kissoon who topped his class. “I wish to personally congratulate you for the good work you have done, and look forward to your full participation in this family (GCAA) as we move this authority to better and higher skies,” Field said.

The Director pointed out that, “I did receive a report from the principal of the school in Jamaica, and she was full of praise for not only your behaviour, but also on your attention to work, and also on your competency as you conducted yourself through the course.”

The report stated, “The students were not just outstanding in their class work, but also in their deportment and attendance. They were always on time, travelling together, respectful and attentive during classes. We would like to commend the Guyanese officials in their selection of these trainee controllers, and wish them all the best in their endeavour.”

GCAA’s Training Officer, Courtney Frank noted that, “We have embarked on a very ambitious programme for the first time in the history of 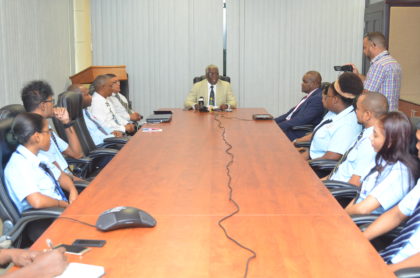 civil aviation in Guyana.  A class of 35 students is currently being trained locally, as air traffic control assistants. The training commenced on December 5, 2o16 and will conclude on March 9, 2017.

Speaking on the just concluded training in Jamaica, Frank explained that that country was chosen because it has an approved accredited school. “We went to several schools and Jamaica was the most competitive priced that will conduct the training at a time we wanted,” Frank stated.

“What I see on the horizon with the airport expanding, the extension, the runway,” Field said, “I can guarantee you, the government and people of Guyana that we will be moving the authority to better skies.”

Valedictorian Devindra Kissoon said, “it was a rigorous training well composed, our exposure with the Civil Aviation over the years would have given us the tools and expertise to excel over there… we expected it to be hard, it was, but as a group, we pulled through.” 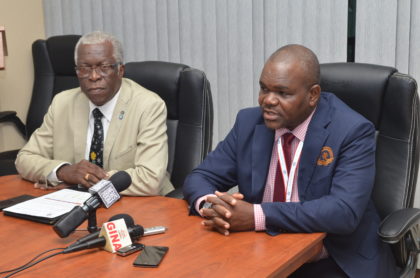 Director General of the Guyana Civil Aviation Authority (GCAA) Egbert Field and Courtney Frank, Training Officer of the GCAA, speaking at the press briefing at Kingston.

The training is not fully completed because the local aspect has to be done and licences obtained, Kissoon explained. The training programme hosted by JCAAI lasted from September to November.

Director for Air Navigation Services, Rickford Samaroo congratulated the students and explained that the next phase is for them to acquire their licence. He said, “We will have to supplement training with some local procedures which we started this week, already.”

In January, he further explained, “You will embark in your actual control of live traffic under supervision” which will last for a minimum of three months, thereafter a recommendation will be made to the licence section for “you to be issued with your licence to practice as full time air traffic controllers.”

Meanwhile Samaroo said the GCAA was granted government’s approval for the purchase of a new state of the art simulator. He noted that the simulator “is to perform local training for staff to make the GCAA more efficient.”