As the local car industry continues to grow rapidly, the Guyana Oil Company Limited on Monday launched its Castrol GTX Promotion. Eric Whaul, Marketing and Sales Manager of GUYOIL said that the promotion was designed to promote and encourage the sale of low viscosity lubricants and to promote the GTX Ultra Clean. 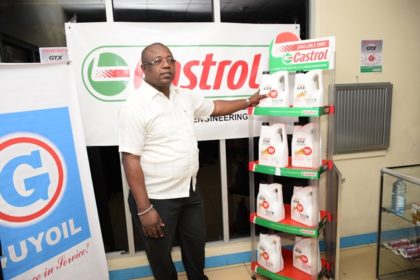 Sales and Marketing Manager for GUYOIL, Eric Whaul with a display of the new GUYOIL GTX lubricants.

“When you use high viscosity, the engine doesn’t perform as it should and you end up burning more fuel, I know a few years back the prices were very high but now they have been regularised and there are now competitive prices,” Whaul said.

The Castrol GTX promotion offers consumers US$2 or GY$420 off every gallon of GTX10W30 or 5QTs GTX Ultra Clean. Consumers purchasing GTX 10W40 and GTX 20W50 will also benefit from this offer. Additionally, each lucky customer will be chosen for a free oil change at a GUYOIL Lube Bay of their choice. The offer is available at all GUYOIL services stations and participating locations while stocks last.