(Georgetown, Sunday, 15th December, 2019)- A paradigm shift in the way residents access potable water in the hinterland is evident as Guyana Water Incorporated continues to make strides in improving the livelihoods of residents there, as it relates to the supply of water. The utility’s most recent achievement is the commissioning of a GYD$15M Water Supply system in St. Ignatius, Central Rupununi, Region 9, on Saturday,14 December, 2019 commissioned a

Some 175 residents in that community, located approximately 10 minutes from Lethem, gained first time access to potable water while some 1500 residents gained improved hours and level of service. 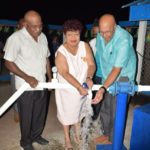 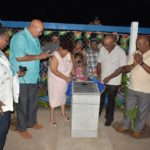 Previously, residents accessed water from hand dug wells or the Moco Moco creek, but with this project funded by GWI and the Regional Democratic Council (RDC), they now have access to water on their premises

The new water supply system comprises a well drilled to a depth of approximately 321 feet, installation of transmission and distribution mains and in excess of 35 service connections, including the schools and dormitories. It was executed by GWI in collaboration with community and is powered by the Lethem Power Company.

Delivering remarks at the commissioning ceremony, Managing Director of GWI, Dr. Richard Van West- Charles highlighted that in the past, in Region 9, wells were drilled and citizens had to walk distances to access water from same.

However, GWI has changed its approach and is now running distribution networks to homes where persons can access water outside of their residences and also connect same into their homes. This, he said, is part of the good life spoken about by President David Granger.

According to him, in 2019, GWI was able to complete the drilling of 22 wells in various regions. This includes wells at Shulinab and Meriwau in Region 9, in Region 7 and Amelia’s ward in Region 10. He pointed out that GWI is delivering first time access to potable water in many unknown communities due to the astute leadership of the President whose mandate of bridging the gap between the hinterland and coastland is being executed.

The investment of the Government was also highlighted, but more specifically, the Managing Director spoke of the almost GYD$300M provided to GWI for the purchase of two rigs, one of which will be used in the hinterland.

Further, the United Nations Development programme (UNDP), Government and GWI have pooled resources to purchase logging equipment which provide guidance on the ideal location for the drilling of wells and the required depth. A maintenance truck has also been procured and will assist in cleaning wells at a faster rate.

Dr. Van West-Charles also turned his attention to the importance of water quality. He said that he does not want a repeat of the occurrence of children and the elderly dying from water borne diseases. The Managing Director pointed out that GWI is working towards having servicemen in every community who will test the water quality on a monthly basis.

These results will not only be provided to the respective village councils but the Public Utilities Commission (PUC) as well. He also noted that GWI’s office in Lethem is equipped with a water quality laboratory where testing is also done.

According to him, GWI plans to continue working in collaboration with RDCs and village councils. He assured that residents in region 9 can depend on the service GWI provides and the company will respond very quickly to any concerns. He thanked the toshao, council and villagers of St. Ignatius for their support in the execution of the project.

Minister of Social Protection, Hon. Amna Ally told the gathering that the Government believes that if the people in Georgetown can be exposed to good education, improved health services and water running through their taps among other things, then the hinterland residents should also be able to experience that.

She said that there has been vast improvement in the hinterland and of this she is proud. Minister Ally specifically noted that she is happy that St. Ignatius has gone past the stage of having shallow wells.

The minster pointed out that for 23 years, the previous administration never sought to allow for indigenous peoples to have water in their communities.

She congratulated the Managing Director and his entire staff for the wonderful achievements across Guyana. According to her, Dr. Van West- Charles has demonstrated vision and the capacity to execute countrywide.

Regional Executive Officer of Region 9, Carl Parker said that the RDC is cognisant of the challenges that the residents face during the dry season. He pointed out that the residents previously had to go water hunting at the Moco Moco to carry out daily chores but thanks to GWI, that is now a thing of the past. He said that the RDC will now be able to reduce the pollutants in the creek and preserve it for other purposes, such as recreational.

Parker on behalf of the RDC expressed gratitude to GWI for the new water supply system.

Further, he pointed out that the council in collaboration with GWI began a programme which saw them providing the utility company with all monies under water development. This, he said, is due to the company possessing the technology that they didn’t.

Parker highlighted that the RDC would have drilled wells which failed within a very short time because they were not drilled to the required depth.  He said that thanks to the vision of GWI’s Managing Director, GWI is now drilling wells which allow the region to have water that is even better than the coast.

Toshao of St. Ignatius, Dennis Benedict said that the water supply system in his community is a demonstration of the commitment of the Government to the people.  He highlighted that the supply of water has always been a challenge during the prolonged dry season.  Further, he pointed out that water security has been a challenge in many other communities in the region, despite the many rivers and creeks.

The establishment of the well, he said, will meet the social and health needs of the people of St. Ignatius. Benedict assured that the community will ensure that the well is maintained and serves its purpose.

Also giving such assurance was Mr. Ryan Farius, a resident of St. Ignatius who expressed gratitude to GWI for the new water supply system.

In the near future, several other water supply systems located in areas such as Karasabai and Aishalton – Region 9, Campbelltown and Paramakatoi – Region 8 and Ituni – Region 10, are scheduled to be commissioned. This in keeping with GWI’s goal to provide clean water for all Guyanese by 2025, five years earlier than that set out in Sustainable Development Goal number 6.