Guyana Water Incorporated (GWI) in its continued quest to provide equal access to potable water has commissioned new water supply systems in the villages of Karasabai and Meriwau in Region 9 (Upper Takutu/Upper Essequibo).

Over 700 residents of Karasabai in the South Pakaraimas district are now receiving improved and first time access to potable water following the commissioning of a GYD$10M water supply system which was funded by GWI and the Regional Democratic Council of Region 9.

The project was executed by GWI, Fox Services & Trade and the Karasabai Village Council and entailed the drilling of a well to the depth of 100 metres, installation of 4 kilometers of distribution pipelines, 78 new service connections and the rehabilitation of the previously existing water supply system.

Minister Allicock in his remarks at the commissioning ceremony told the residents that the water is not being provided only to persons who support the Government but it is for all residents.

According to him, Government recognizes that water is a basic need and one of the most valuable natural resources. He added that with adequate water, the residents will not only be able to have their daily consumption but also be able to use it for other purposes such as watering plants, maintaining livestock and for domestic use.

The minister urged the servicemen within the community who are employed by GWI to further their studies in the area of water so that they can better protect and preserve their water supply.

Highlighting water as a sector in Government’s developmental drive, he took the opportunity to point out that the administration is not only planning and dreaming but it is putting things into practice.

Minister Allicock noted that the current Government has done in a short space of time what no other government in the last 24 years has done.

Managing Director of GWI, Dr. Richard Van West-Charles told the gathering that with the support of the Government and the direction of President David Granger, GWI has over the last four years been able to drill 48 wells across Guyana.

According to him, the company has taken up the call by the president to reduce the inequities between the hinterland and the coastland. He added that water is not only singularly important for human health but also for all facets of development in communities across the country.

The Managing Director alluded to several current developments in the water sector, including the arrival of a new filtration system for Bartica in Region 7 and a well drilling rig for the coastland. A rig for the hinterland is also on its way to Lethem. These rigs were purchased with monies provided by the government.

Turning his attention to Karasabai, he related that there are two servicemen in the community and within the next few weeks, all of the service men in the region are going to be equipped with tools and trained to conduct water quality testing monthly. The head teachers and health workers will also be involved in the water quality testing.

Dr. Van West-Charles expressed gratitude to the residents and leadership of Karasabai for the support provided to GWI’s team in the execution of the project. He also thanked the Board of Directors of GWI, the company’s Corporate Management team and its Region 9 staff who lent to the successful completion of the system.

GWI’s Executive Director of Hinterland Services, Mr. Ramchand Jailal in his remarks explained that a team from Karasabai some 3 years ago visited GWI in Georgetown and expressed the need for potable water, since they were experiencing a shortage.

A visit was made to the community and inspections were done as well as discussions had with its residents. It was found that the previously existing wells, one drilled and one hand dug, could not produce all of the water that the community needed. From thereon, plans progressed for the drilling of a new well which could adequately supply the community.

Toshao of Karasabai, Mr. Shaun Kartright said that he is seeing development in his community that they had never seen before. He pointed out that each household is now receiving water, a far cry from the previous situation of water shortages. 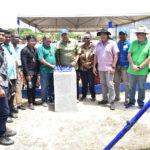 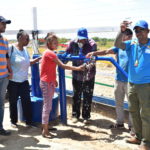 Meanwhile, GWI on Friday, 28th February, 2020 ventured to Meriwau in the South Central District, approximately one and a half hours from Lethem to commission the community’s new water supply system.

The system was constructed at a total cost of approximately GYD$13M and was funded by GWI and executed by the company in close collaboration with the Meriwau Village Council. It entailed the drilling of a well to the depth of 150 meters, plumbing works, installation of 1.3 kilometers of pipelines as well as the installation of several individual service connections. As a result, over 100 residents are receiving improved and first time access to potable water, including a village office, church and health post.

Speaking at the commissioning ceremony, Dr. Van West-Charles said that the project is one of the manifestations and a fulfillment of the direction given by the president to bridge the inequality gap.

He stressed that the good life is for all, regardless of which political party residents support. Hence, when GWI visited to assess the needs of the community, the company’s officials did not look to see which residents had the flags belonging to any particular political party.

The Managing Director pointed out that the good life speaks to where persons live, work and study, so GWI is not only focusing on water access for schools and health facilities but also directly into persons’ homes.

The company’s head of Hinterland services said that the residents of Meriwau can drink the water provided by the new well. This is a significant improvement, considering that a few years ago it was found that the community had a hand dug well which was almost dry and the water was also at risk of contamination.

Mr. Jailal encouraged the residents to maintain the infrastructure and care for it as he thanked the community for supporting the GWI team in the execution of the project. He also expressed appreciation to the Managing Director for his leadership and guidance.