(Georgetown, Friday, March 8, 2019) Guyana Water Incorporated (GWI) on Friday, March 08, 2019 observed International Women’s Day 2019 under the theme “Balance for better” in the Mining town of Linden, with resounding pleas for men and women to work together to achieve such balance.

Minister within the Ministry of Communities, Hon. Valerie Patterson-Yearwood was one such person to make that plea as she addressed the gathering at GWI’s event hosted on the lawns of the Watooka Guest House.

The minister pointed out that achieving gender balance will take action on every front and the removal of barriers that are set up. This, she acknowledged, is not an easy task nor is it one that is limited to the efforts of women alone. 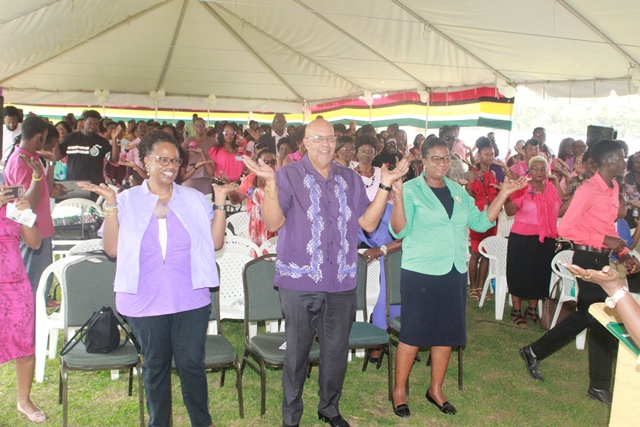 Members of the audience gesturing the “balance for better” at the event hosted by GWI in observance of International Women’s Day 2019. 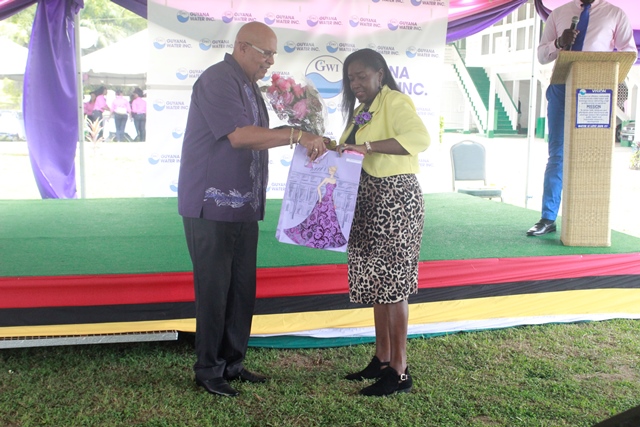 Minister within the Ministry of Communities, Hon. Valerie Patterson-Yearwood addressing the gathering.

Making reference to the stereotypical privileges of boys and girls growing up, she also highlighted that society has evolved and the future for women is exciting.

Minister Patterson-Yearwood noted that more women are taking up careers as civil engineers, electricians, Mechanics and drivers, among others.

She encouraged women to believe that their role is not one limited to caregiving, but they have the ability to realise their full potential.

Further, the minister stressed that women must be decision makers and must be present to make decisions that affect them and their families. She also noted that like their male counterparts, women should be given the opportunity to excel and to be treated equally.

Meanwhile, Managing Director of GWI, Dr. Richard Van West-Charles said that if the “balance for better” approach is taken, there will exist better homes, workplaces, communities, regions, countries, and a better world.

He highlighted the imbalances in access to potable water in the hinterland regions, as he pointed to the company’s recent visits to Region 9, where such imbalances were discovered. However, those imbalances are being addressed in a cooperative construct which involves the region, ministries of Health, Finance, Communities, Indigenous Peoples’ Affairs and Education.

Interventions such as these form part of a strategic approach being taken by GWI, which is also in keeping with President David Granger’s call for equity between the hinterland and the coastland.

Dr. Charles also acknowledged that many girls, women, boys and men on the coast also have experienced and are still experiencing difficulties relating to access to potable water on a 24 hour basis.

Turning his attention to Linden, he informed that GWI has to immediately replace about 6 pumps, which have been ordered and will arrive within 4-6 weeks. This, he said, will bring balance for better for residents such as those in South Amelia’s Ward.

The Managing Director also used the opportunity to stress the need for more balance in the operations of GWI as he acknowledged that too few engineers are women.

“We must ensure that as we go forward to achieve the balance, we go with confidence, not allowing the pathways to better balance to be disturbed by divisiveness based on race, religion and class. We have to address the difficult economic circumstances of many families across Guyana,” he stated.

It was also acknowledged that there is the need to find ways to better enhance the recognition of women and address the disparities and inequalities which currently exist.

Among those present for the event were Region 10 Member of Parliament, Hon. Jermaine Figuiera, Regional Councilors and GWI management and staff.