The Guyana Water Incorporated (GWI) has to date amassed a record $1.8B in outstanding debt, owed to the company, by defaulters. The outstanding monies were collected since the Chief Executive Officer (CEO), Dr. Richard Van West- Charles took office. 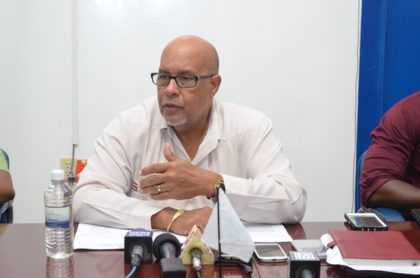 Dr. Van West-Charles said that the water company was able to collect the outstanding payment through an intensive programme of disconnection of defaulters and by “discovering people who are getting water by nefarious means and disconnecting them.”

“We want to say to those entities that are using water illegally that it is time that you recognise that we have an aggressive programme going on,” Dr. Van West-Charles said during a press briefing at the GWI’s headquarters this afternoon at Shelterbelt, Vlissengen Road.

The GWI, CEO also advised that for those contractors, contracted by the water company to provide service, but who have been disconnecting and connecting defaulting customers, “we are blacklisting them, from doing work with GWI permanently.”

To assist with the payment of outstanding dues, the GWI, CEO explained that the water company has established a system of contracts, whereby a defaulter can sign a contract with GWI to pay monies owed through a system of payment installments.

Recognising as well, that in certain circumstances, customers have had runaway bills, which would have resulted in late payment; Dr. Van West- Charles explained that GWI is now moving to have, on a monthly basis, the distribution of bills.

The water company intends to also read water meters on a timely basis, the CEO said.

Dr. Van West – Charles reminded that if a customer does not pay his/her bill within 45 days, then a disconnection order will be placed for that customer’s water supply to be disconnected. Once disconnected, the customer will have to pay a reconnection fee of $7000.