Minister of Business Dominic Gaskin told members of the Parliamentary Sectoral Committee on Foreign Affairs today, that Guyana signing on to the Hague Conference’s Apostille Convention would make it easier to authenticate public documents.

This means that the authentication of public documents such as birth, marriage and death certificates, extracts from commercial and other registers; patents; court rulings; notarial acts and attestations of signatures and academic diplomas issued by public institutions can be accomplished swifter, safer and with greater efficiency. 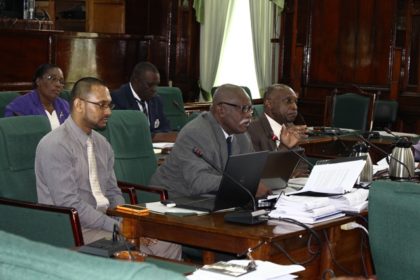 These sentiments were expressed during a question and answer segment that preceded a presentation by Minister of Citizenship Winston Felix on the role of his Ministry.

Minister Felix during the presentation outlined how someone can be eligible for Guyanese citizenship.  One such option relates to a child being born overseas to a parent of Guyanese descent.  Such a child wishing to obtain Guyanese citizenship must follow a process which entails sending the child’s birth certificate to the relevant agency here.

Minister Felix responding to questions posed regarding the administrative system that is in place to verify such a public document emanating from another country, indicated that more research will be done by his department to ensure an efficient system obtains.

Minister Gaskin, Vice Chairperson of the Sectoral Committee however indicated that research looking further ahead must be done.

“There was a few weeks ago in Guyana a Hague Conference… one of the topics discussed was the Apostille Convention which has to do with the authentication of public documents across borders,” Minister Gaskin said.

The Minister of Business added that Guyana being a signatory to that convention would certainly make it easy for it to get documents authenticated because the process is a lot more efficient. 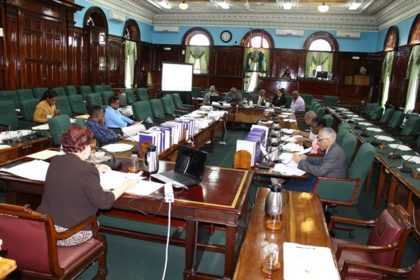 Members of the Parliamentary Sectoral Committee on Foreign Affairs

The presence of Minister Felix at today’s Committee session and his presentation on the role of the Ministry of Citizenship was a direct response to questions posed by the opposition during a sitting of the National Assembly.

The Apostille Convention has an e-App Programme which offers an effective tool to further enhance the secure and effective operation of the Convention. It dramatically increases security and offers a very powerful and effective deterrent to fraud.