─ “language of CCJ could not be clearer”- Chief Justice

Chief Justice (ag), Roxane George has ruled that there is nothing unlawful or unconstitutional about the Guyana Elections Commission’s (GECOM) House-to-House Registration exercise.

The High Court Judge declared too that her court, like the Caribbean Court of Justice (CCJ), will not be interfering with matters outside its jurisdiction to name a date, more specifically September 18, for General and Regional Elections.

After two hearings in the substantive matter challenging the legality of the House-to-House Registration, the acting Chief Justice handed down her ruling to a packed court.

The fixed date application filed by accountant Christopher Ram, through his attorney Anil Nandlall, asked the court to put an end to the House-to-House Registration exercise currently being conducted. He contended that it was illegal, following the No Confidence Motion (NCM) ruling by the CCJ. Further, the Chief Justice refused all of the requests made to the High Court in this regard.

The government has always maintained that for credible elections to be held, there must be a clean, credible list. The current Official List of Electors (OLE) expired at the end of April of this year.

“What is very important is that the House-to-House [Registration] is not unconstitutional. No date was ever fixed by the CCJ, and she would not fix a date either, and no elections will be held in three months as they had contented. There was nothing that was asked by the applicant of the court that was successful,” he stated.

Through his attorney Anil Nandlall, Ram had asked the court to set a timeframe for elections for September 18. 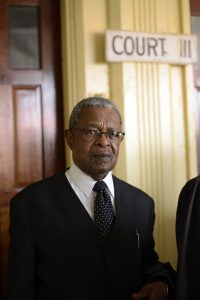 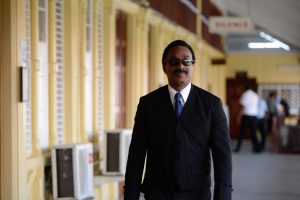 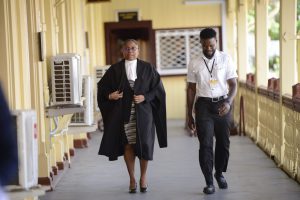 Chief Justice (ag), Roxane George on her way to the courtroom

However, the acting Chief Justice said the language of the CCJ could not be clearer. She said the highest appellate court refrained from setting a date or period for the holding of elections and that the lower court will also follow suit.

“It is not within the jurisdiction of the court to do so. To do so, will be to disregard the rule of law, and act contrary to the dictates of the Constitution, which the court is duty-bound to uphold,” the acting Chief Justice said in her ruling.

The CCJ, she reminded, had emphasised this in its consequential order judgement, stating that Article 106 of the Constitution invested in the Head of State, the National Assembly and implicitly Guyana Elections Commission (GECOM) to address matters relating to the elections.

Another challenge before the acting Chief Justice was the legality of the appointment of GECOM lawyer, Stanley Marcus. The court found that in the absence of a chairman, the Chief Elections Officer (CEO) is the next most senior functionary and was well within his right to select an attorney to represent the commission.

The applicant’s lawyer had continuously contended that the CEO should not have appointed the legal representative. According to Ram’s lawyer, the commission was not fully constituted by the absence of a chairman.

The acting Chief Justice ruled that the applicant, Christopher Ram will pay the Chief Elections Officer $500,000, 75% and 80% of that amount respectively to GECOM lawyer and the Attorney General.

The full audio of today’s ruling is provided below.