Georgetown, Guyana – (October 15, 2018) Minister of State, Mr. Joseph Harmon was today paid a courtesy call by Ambassadors and High Commissioners of European countries to Guyana, who are currently conducting the Sixth Round of the European Union (EU)-Guyana Political Dialogue under the framework of the African Caribbean Pacific States (ACP)-EU Cotonou Agreement. The delegation was headed by EU Ambassador, Mr. Jernej Videtic. 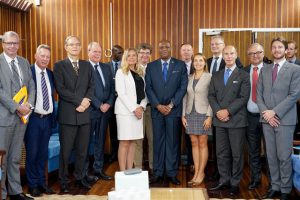 Minister of State, Mr. Joseph Harmon and the visiting delegation at the Ministry of the Presidency today.

During the meeting, which was held at the Ministry of the Presidency, Minister Harmon assured the visiting team that notwithstanding the burgeoning oil and gas sector on the horizon, the country remains steadfast to pursuit of environmental sustainability and a ‘green’ development trajectory. He also informed them of the Green State Development Strategy (GSDS), which will be laid before Cabinet next week.

After it is deliberated on at the level of Cabinet, the GSDS will see widespread public consultations with various stakeholder groupings and will be tabled in the National Assembly.

“The GSDS is basically Guyana’s model going into 2030…its principal focus will be to develop the sustainable elements of our society. The areas that will be priorities are infrastructure, education, health and our environment…We know that oil is a finite resource and therefore, it is the revenue of the oil that we will have to use to develop our agricultural base and other important sectors,” the Minister said.

He also informed the team that Guyana is open for business and encouraged them to take advantage of the opportunities for investment.

Commenting on the political climate in Guyana, Minister Harmon said that despite the differences of opinions among the major political parties, there is a general consensus that Guyana must be developed. He also spoke of the Government’s policy to engage all stakeholders, especially the political Opposition, in the decision-making process.