Residents of flood-affected Region Five communities were today given the opportunity to voice their concerns when a high-level ministerial team, comprising Minister of Public Security, Khemraj Ramjattan, Minister of Citizenship, Winston Felix and Minister in the Ministry of Public Health, Dr. Karen Cummings visited the region. 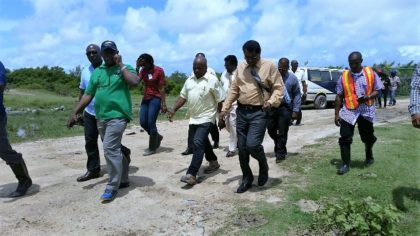 The ministerial team along with technical officers of the Ministry of Public Infrastructure visited the affected communities within the region, and engaged the residents. The team visited Union, Golden Grove, Number 30 and the Trafalgar pump station. 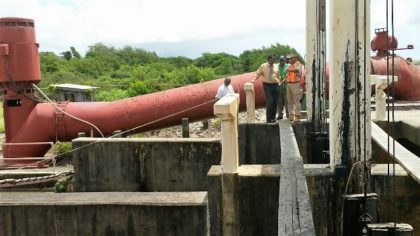 Among other interventions made to mitigate the situation are the deployment of two other pontoon-based excavators which are to arrive at Trafalgar this evening while dredging of the outfall channel will commence tomorrow.

During interactions, the residents detailed to the Government officials their losses, and sought assistance. Residents were encouraged to compile a list of their losses so that the government officials would be able to assess the cost of such a natural disaster. Addressing the issue of compensation, Minister of Public Security, Khemraj Ramjattan told residents that the issue will be discussed at Cabinet.

Meanwhile, a team from the Ministry of Public Health was on the ground distributing cleaning agents and bed nets to residents. 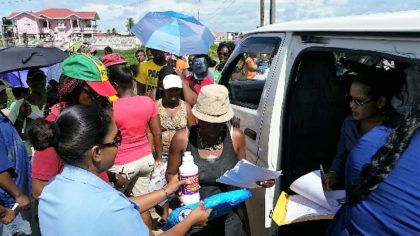 The Ministerial team explained to the residents that the immediate goal is to the drain the water off the land, to save farms and livestock. The residents were told that the administration is concerned about the situation, and will work with all stakeholders to bring relief as soon as possible.

Following the on-the-ground inspections, the government and technical teams met with the Regional Administration and other stakeholders at the Regional Democratic Council’s Boardroom, and discussed areas of intervention for the flood affected communities. 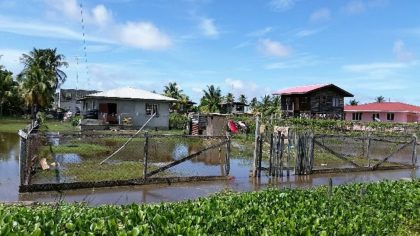 Water receding from a resident yard at Number 30 Village

During the boardroom meeting, regional councillors raised several issues related to the causes of the flood, among them are the vandalising of control water gates by farmers, the need to resuscitate abandoned sluices and the importance of ensuring community enhancement workers under the Community Infrastructure Improvement Programme (CIIP) carry out their functions effectively to minimise overgrowth in the secondary drains.

Inspections on the ground by the team also revealed that the backlands of these villages are not flooded. Information provided points to rice farmers, who are now sowing the second crop, releasing water into the drainage canals which run through the residential areas. This, coupled with heavy rainfall, non-functional pumps and the heavily silted Trafalgar outfall channel has resulted in flooding in many low-lying communities in the Mahaica Mahaicony Abary (MMA) district. 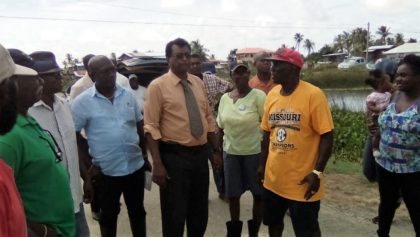 Currently, the National Drainage and Irrigation Authority (NDIA), in collaboration with the MMA has deployed three mobile pumps, six tractor-operated pumps and five excavators to the West Coast Berbice villages of Golden Grove, Lovely Lass, Trafalgar, No. 29, Union and Lichfield villages which are the most affected in the region. Two of the mobile pumps which have the capacity to drain 1200 gallons of water per second have been deployed at Trafalgar, while the other is stationed at Bush Lot.