Voting by police ranks in Region 10 saw a more than 98 percent turnout at the six polling stations across the Upper Demerara-Berbice area. 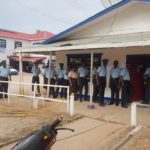 Ranks queuing to cast their ballot at the Mackenzie Police Station. 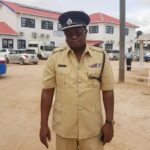 Commander of Region Ten, Superintendent Hugh Winter after he cast his ballot at the Mackenzie Police Station.

Ranks of the Guyana Defence Force assigned in the region, cast their ballots at Base Camp Seweyo on the Linden Soesdyke Highway.

Superintendent Winter noted that “the process was smooth in Region Ten, there were no problems, no reported incidences.” He also disclosed that all systems are in place to provide the needed security on elections day. “March 2, we are on top of our game, we are ready,” he stated.

While there are 65 polling stations across Region Ten, there are 122 ballot boxes to be secured and ranks have already been assigned to these boxes while others will perform general duties to ensure the Election Day atmosphere in Region Ten remains incident-free.

Observer for the APNU-AFC Coalition Coretta Braithwaite, who was stationed at the Mackenzie Police Station said at the end of polling there were no complaints with the day’s procedure. “No hiccups. I was impressed with the GECOM staff. They were efficient,” Braithwaite said.

While, observer for of the People’s Progressive Party (PPP), Andrew Forsythe shared similar sentiments. “Very smooth, no hiccups, and all the reports are favourable. I received reports from all the outlying communities and everything is ok,” he said.