-Relationship between Guyana and Spain lauded

Spain’s Honorary Consul to Guyana, Brian Tiwari was presented with one of that country’s highest national award -the Officer’s Cross of the Order of Civil Merit.

This evening, at a reception hosted at the Marriot Hotel, Tiwari was presented the award by Non-resident Ambassador of Spain to Guyana, Javier Maria Carbajosa Sanchez. It was decreed by His Majesty King Philip the 6th, in recognition of the qualities and merits possessed. It was officially awarded in Madrid, Spain on December 6th, 2017. 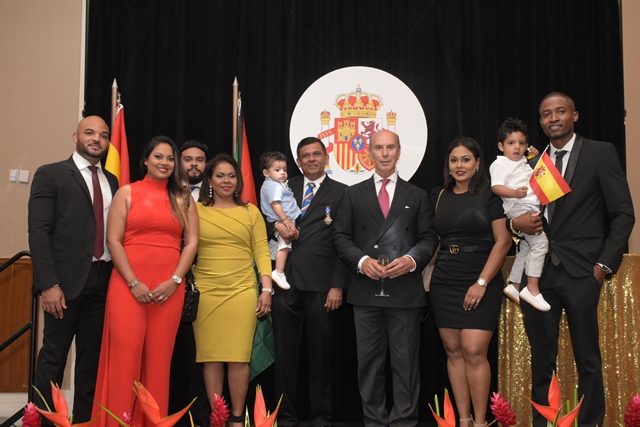 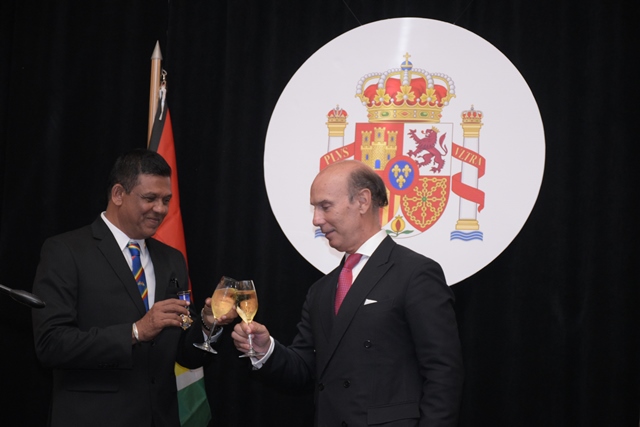 The Honorary Consul expressed his gratitude towards Spain’s government, stating Guyana must be proud of the award, “as it celebrated the close and growing relationship between the two countries.”

Tiwari said that friendship will be further demonstrated when all the proceeds from a flamenco concert, billed for the Theater Guild in December, will be donated to the National Rehabilitation Centre. The Honorary Consul described his appointment, and service, as one which continues to be a memorable experience adding that the countries’ relationship is further cemented, “not only culturally but also in the growing oil and gas sector via REPSOL. He expressed optimism that “other companies would follow to invest in the tourism, agriculture, and commercial sectors.”

The decades-long relationship between the two countries was highlighted by Ambassador Carbajosa Sanchez. The diplomat said it was his pleasure to “acknowledge the merits of someone who has been doing such a splendid job, for Spain.”

The Ambassador noted that without a career consul in a city, it was difficult to find the right person to represent his country, “You need a person with dignity, with integrity, with the right connections, working for free. Ready to use time, energy and his own money t0 promote the image and interests of your country. This is precisely what Brian has been doing all these years.”

The ambassador described Honorary Consul Tiwari as a patriot and a successful businessman, offering invaluable assistance towards maintaining the countries’ close friendship, “your work here has been an important part of it all.”

Guyana and Spain established diplomatic relations on October 12, 1979. These ties are founded on mutual respect for each other’s territorial integrity and sovereignty, mutual non-interference in each other’s internal affairs, cooperation for mutual benefit, respect for treaties and international law and the maintenance of international peace and security.