Forty-six- year-old Deborrah Wilson is the first occupant of a duplex home constructed by the Government as part of its housing solution programme. 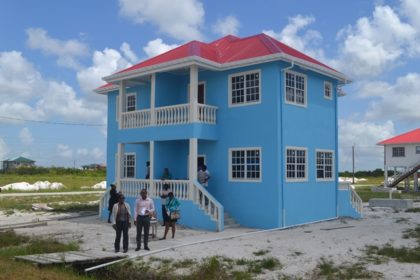 One of the duplex homes at Perservance , East Bank, Demerara.

After waiting 24 years, Wilson is now the proud owner of a complete home outfitted with all the amenities. She expressed her elation at being the first owner of a home in  the model Village at Perservance.

“I feel so happy owning a duplex and I am the first to own one in Guyana. I had applied since 1993,” Wilson told media operatives at the simple handing over ceremony at Perservance, East Bank Demerara.

Winston Persaud, who will be her neighbour in the adjoining two story flat was also handed his keys. The duplex was sold to both occupants at a cost of $6.8m.

Persaud said he is satisfied and expressed gratitude to the government for affording him this opportunity. “I want to thank the Minister and all her staff for this opportunity of owning my own home, this is the biggest step in life and it’s a wonderful opportunity to own my home for the first time, it’s a big investment, it’s a lifetime investment and I will care it  because its  it’s a model home.”

The two new home owners  who spoke with the Department of Public Information (DPI)  and Gary Rowe, who will occupy 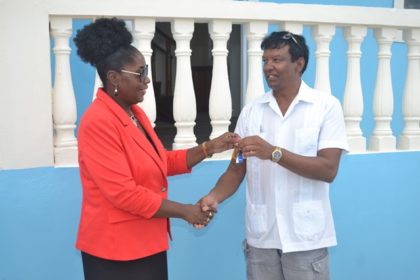 Winston Persaud receives his keys from Minister within the Ministry of Communities, Valerie Adams-Yearwood.

the $7 million single elevated home ,were the three persons who received their keys from Minister within the Ministry of Communities, Valerie Adams-Yearwood, today.

Minister Adams-Yearwood urged the occupants to care the homes since they are a part of the model village and the CH&PA will be using the houses to show potential buyers. She also reminded them to adhere to the rules which allows them to expand after five years.

Minister Adams-Yearwood also announced that Central Housing and Planning Authority (CH&PA)  will be constructing forty (40) additional flat concrete duplexes  at Perservance, Phase 2. CH&PA is currently awaiting the contractor’s performance bond, after which the contracts will be signed. 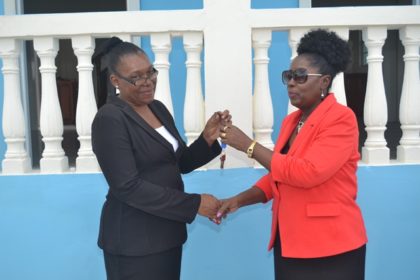 Deborrah Wilson receives her keys from Minister within the Ministry of Communities, Valerie Adams-Yearwood.

However, the minister notedthat persons were not receptive to the duplex style homes. She said that the CH&PA will have to host more engagements and consultations with residents on that programme.

In the interim, she said that the authority will be constructing the single elevated and flat houses in those areas.

The CH&PA had on display and for sale, two single units and six duplexes at the Housing Solution 2017 and Beyond Exposition held at Perseverance East Bank Demerara, in May. A direct result of the expo is a renewed interest in the CH&PA’s housing solutions; over 3000 persons applied during the expo for units.