“I was able to pursue my dreams” – PSM Scholarship recipient

–Over 1500 scholarships awarded in 4 years

Marvin Layne, valedictorian of his graduating year at the Guyana School of Agriculture. Is lauding the Department of Public Service for allowing him to follow his dream.

“I am from a farming background. My grandparents and parents are both actively involved in farming and may not find it easy at times to finance the higher education of their children. But through the Department of Public Service, I was able to acquire a scholarship and pursue my dreams at the Guyana School of Agriculture”.

Layne who achieved a Certificate in Forestry is one of 200 scholarship recipients sponsored by the Department of Public Service. 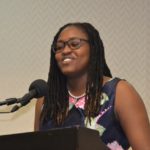 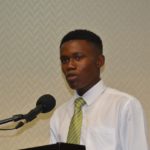 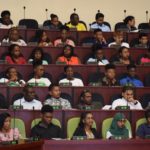 A section of scholarship recipients.

Speaking at an orientation exercise held on Saturday at the Arthur Chung Conference Centre (ACCC), Minister of Public Service, Honourable Tabitha Sarabo-Halley shared anecdotes of her own time as a tertiary level student and urged the new awardees to grasp this tremendous opportunity for development.

“Your Government is committed to ensuring that all persons who wish to pursue a higher level of education are not stymied by the high cost of education at the tertiary level,” the Minister noted.

She further explained that the concept of an educated nation “demands government’s continued commitment to not only revamping the current curriculum at the primary and secondary levels but also, increasing resources to ensure that more persons can attend tertiary educational institutes without the burden of high tuitions.”

Assistant Registrar, Student Services, University of Guyana, Daniella King walked the new students through some of the University’s guidelines and available platforms for information, grades, registration and other student-related matters.

Over 1500 local scholarships have been disbursed over the last four years, representing a sharp increase in comparison to the previous administration.  Another 377 Guyanese have benefitted from international scholarships to 30 destinations in that same period.

A majority of these students are Masters and PhD level students studying in the United Kingdom, China and Cuba.

Of the 197 scholarships awarded to tertiary institutions for the 2019-2020 academic year, 37 were granted to students of the Guyana School of Agriculture (GSA) while 11 were given to students attending the Georgetown American University (GAU). A total of 197 students at the University of Guyana were also awarded scholarships.

“The Department of Public Service intends to increase the number of scholarships given annually in areas that will see us building our capacities in all of our sectors,” the Minister stated.

Minister Sarabo-Halley outlined that the Decade of Development demands a significant increase in the capacity of our human resources in the public sector and the country at large, not just in the oil and gas industry but all other industries that can contribute to our GDP and new industries that can be created with the availability of resources.

More information on Government of Guyana scholarships can be found using the following link www.dps.gov.gy