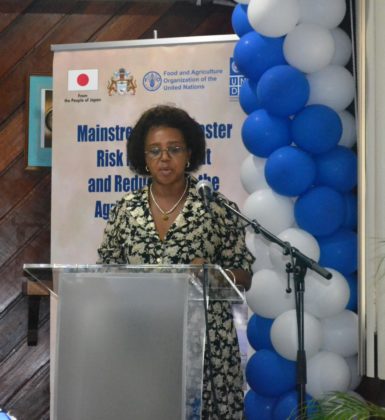 The US$300,000 project which is funded by the Japan Government with supervision by the United Nations Development Project (UNDP) and the Food and Agriculture Organisation (FAO) was officially launched today in the UNDP Conference Room, Brickdam.

Agriculture Minister, Noel Holder in delivering the feature address underscored the importance of implementing enhanced DRM mechanisms to offset the impact climate change has on agriculture production in Guyana, and which has caused increased focus on the need for enhanced agriculture disaster and risk management systems to be implemented.

Building on the past achievements, projects such as these are necessary according to the Agriculture Minister, as Agriculture Risk Reduction and Disaster Management revolve around adaptation and mitigation initiatives to prevent and manage floods and droughts.

“With the kind of economic losses and developmental setbacks that Guyana has experienced because of El Nino or drought-like periods and La Nina-related floods, particularly since 2000, it makes good economic sense to invest in prevention and mitigation of disasters,” he said. 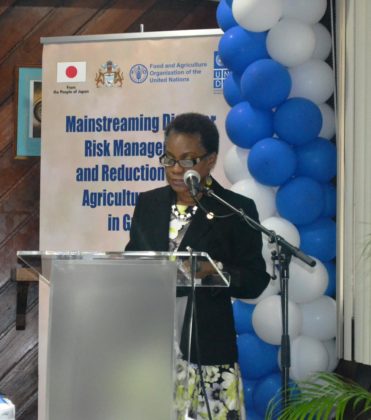 Minister Holder echoed the call for the critical masses to be fully equipped with knowledge and skills to direct such need transformation, for the needed change to occur. 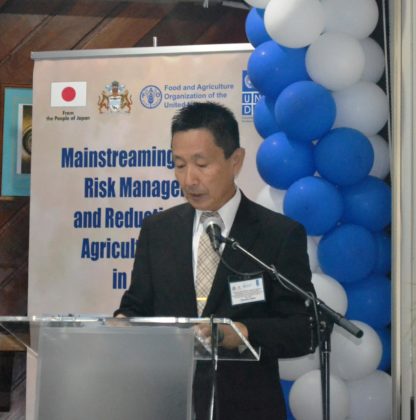 Japan’s Ambassador to Trinidad and Tobago His Excellency, Mitsuhiko Okada

Japan’s Ambassador to Trinidad and Tobago His Excellency, Mitsuhiko Okada spoke of the importance Disaster Risk Management plays and pledged the continued support of the People and Government of Japan to Guyana.

In February, the Japanese Government approved the US300,000 to support DRM in Guyana; which according to the Ambassador will significantly aid in strengthening the system.

Meanwhile, FAO’s Deputy Sub-Regional Coordinator for the Caribbean, Dr. Lystra Fletcher-Paul pointed to some of the impacts natural disasters pose on the Caribbean annually.

In 1998, as a result of drought, 35 percent of Guyana’s rice fields were left uncultivated due to insufficient water. “There is a direct link between disaster and food insecurity….they interrupt market access, trade and food supply, reduce income and employment, deplete saving and erode livelihood,” she said.

In 2013, the FAO worked with the Ministry of Agriculture to develop a DRM plan for the agriculture sector.

The importance the project will take on reducing the effects of climate change was also emphasised by UN Resident Coordinator and Finance Secretary, Ministry of Finance respectively, Ms. Khadija Musa and Dr. Hector Butts.

The Japanese -funded project remains a timely initiative in assisting the agriculture sector in Guyana to respond more effectively to the impacts of climate change.