The Guyana Energy Agency (GEA) and the Hinterland Electrification Company Incorporated will be conducting assessments in Mora, Rincon and Karaburi, in Santa Rosa.

This assurance was given by Minister of Public Infrastructure, David Patterson during a recent meeting with the Santa Rosa Village Council. He said the assessment will determine whether these villages are qualified for solar farms like that at Mabaruma.

Santa Rosa is the largest Indigenous community in Guyana with a population of 10,000. The village itself is powered by the Moruca Electricity Company which is managed by the regional administration, however, this service does not reach the islands.

Minister Patterson explained that as a member of the International Solar Alliance (ISA), Guyana will benefit from a $3Billion (US$15Million) line of credit, from which the Government plans to power several Indigenous communities. These will be utility-scale installations rather than rooftop solar, to ensure entire villages are powered. It is anticipated that 4 megawatts of power will be achieved from that project. 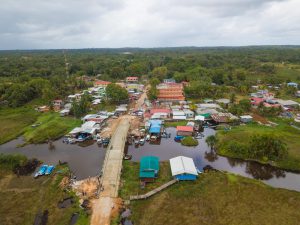 An Aerial view of a section of the Santa Rosa village, Moruca sub-District, Region 1 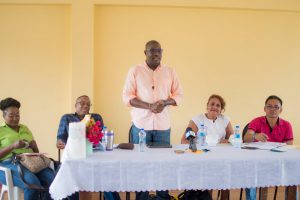 In the case of Karaburi, which has a population of over 800 persons, under the previous administration, the village was promised electricity, in fact, poles were installed and left for a long period before the previous Toshao removed them. The residents were devastated as they were anticipating current.

“We have heard about these things…I can tell you that my government and ministry would never do that to you. we would never put poles in your village during election time and then take them back. When we make a commitment, we will deliver,” Minister Patterson assured.

He, however, noted that the main constraint is that the homes are sparsely located in these areas and cost for the network can be burdensome. “So, while we can power the administrative centre easily; to give every resident in the community is a challenge. Sometimes, you have one house one mile away from the centre and that can be challenging network-wise. So, we will do the assessment to see what can be done.”

Additionally, the ministry is working to bring the Moruca Electricity Company under the purview of the Hinterland Electrification Company Incorporated. Currently, the company receives $10 Million annually to assist with operations.

“We are hoping to get it done this year and remove it from the region so that we can spend more money to upgrade it… I will double my efforts to get it done as soon as possible. I saw the engine and it is not the best and so we will have look at that,” Minister Patterson said.

In the interim, the Village Council will utilise their annual Presidential Grant to expand the network. The funds were exhausted to procure the poles which have been installed. Minister Patterson promised to assist the council with the 2000 feet of poles and transformer needed to complete the project.