Victorians were urged to embrace the spirit of their ancestors to change the state and condition of the village, as the First Village Indaba 2016 celebrations opened yesterday.

The celebration which was held at Kingston and Benn Streets in the village on the East Coast of Demerara, featured addresses from Minister of Communities Ronald Bulkan, and from the Indaba Committee’s member, Desmond Saul. Justice Joann Barlow delivered the feature address. Also present were Minister within the Ministry of Education, Nicolette Henry and Speaker of the National Assembly, Dr. Barton Scotland. 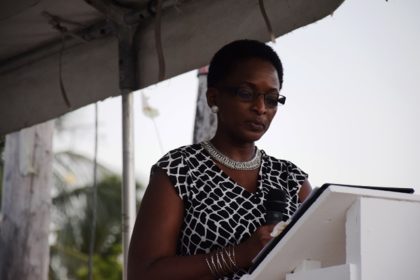 Justice Barlow urged the gathering to look back and acknowledge the strengths, the confidence, the resilience and the determination of the village’s fore parents, “whose blood, sweat and tears did not blind them to the vision of a brighter future.”

She observed however, that in looking back, the villagers must “look beyond the chains that bonded their ancestors” and instead look and acknowledge the valuable lesson in their “great degree of trust and overwhelming willingness to work together to purchase the village.”

Barlow said that this principle of “working together to break new ground and to transition from being owned by planters to become land owners,” that guides the ancestors must guide the Victorians of today.  She told the villagers that Victoria will not return to her glory days without a willingness to revive this spirit of working together for the common good.

In his brief remarks, Minister Bulkan said that Victorians have good reasons to be proud. He told the villagers that their fundamental values 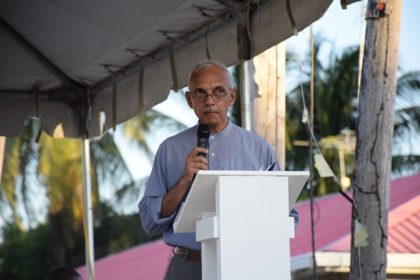 Minister of Communities, Ronald Bulkan addressing the opening of the Indaba 4 at Victoria, East Coast Demerara

of spirituality, education cooperativism and community “are to be admired” and that they should be applied, not just in Victoria, but all communities of Guyana.

“It is only through the possession of strong values such as those that you recognise as your pillars, it is only through the recognition that we have an obligation to maintain high moral standards that any community can make progress, and provide the opportunity of a good life for all who live there…,” the Minister said.

This is Victoria’s fourth Indaba. The village first held the activity in 2010, and then subsequently in 2011 and 2012.

The First Village Indaba Day was initiated following discussions between the villagers, at home and those in the diaspora. The idea was to create a forum to address the state and conditions of the village for the betterment of villagers, Saul explained. 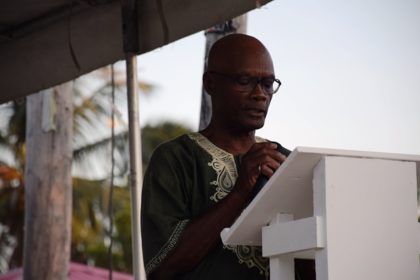 Since the first Indaba, significant activities were discussed, resolution passed and implemented for the village benefit.  Saul said however, that one thing that the Indaba has brought to light is the need for support for communal decisions.

He recalled that attempts were made to revitalise the village cassava and coconut industries and in this regard, at the First Indaba, planting materials were acquired and distributed free of cost.

Saul said the gesture was not embraced by the majority of the village, “An initiative that could have put us on the map, ahead of Madam Coco and the Coconut Festival was squandered. I hope we have learned,” he said.

Noting that the village has tremendous potential as a tourist destination, food 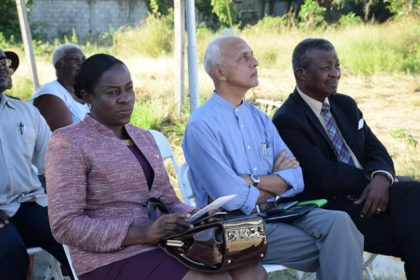 Minister within the Ministry of Education Nicolette Henry, Speaker of the National Assembly Barton Scotland and Minister of Communities, Ronald Bulkan among the gathering at the opening of the Indaba 4 in Victoria

producer and an agro-processing centre, he urged that they embrace education in a more meaningful way, and depart from the current consumption and peddling of illicit substances that are destroying the village’s human resources. “Embrace once more the spiritual faith of our forefather. This is the vision that has spawned the Indaba,” Saul urged.

The day’s celebration, in addition to the addresses, also included the raising of the Golden Arrowhead and the Village Pennant, the ringing of the bell summoning the villagers, and drumming, singing and dancing. 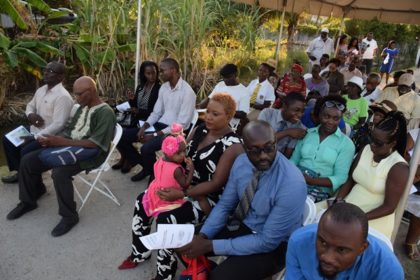 A section of the crowd at the opening of the Indaba 4 at Victoria, East Coast Demerara

The celebration which continues through the weekend and goes until Monday will include an agricultural fair and exhibition, a workshop on climate change, a family fun day and a National Day of Village.

Victoria was initially established as a plantation called Northbrook. In November 1839, 83 ex-slaves from five nearby estates (Dochfour, Ann’s Grove, Hope, Paradise and Enmore) pooled their resources and bought Plantation Northbrook for 30,000 guilders or $10,283.63. Each of the 83 owned one lot of land. After its purchase, it was renamed Victoria, presumably in honour of England’s Queen Victoria, although some suggest it may have been named as such in honour of the free slaves’ victory.

The Indaba 2016 celebration is being held under the theme, “Reconstruction: after historical devastation; spiritual deterioration; family integration; and education decline.”