Georgetown, Guyana – (July 8, 2016) Minister of State, Mr. Joseph Harmon, this morning, received the report of the inquiry made into the allegations made against officials of the Customs Anti-Narcotic Unit (CANU) by self-confessed drug lord, Mr. Barry Dataram. The probe was conducted by Brigadier Bruce Lovell, who was appointed by President David Granger, shortly after the allegations were made.

Brigadier Lovell said that the allegations made by Dataram are of a very serious nature against officials of the State and as such it was incumbent on the Government to carry out an investigation, which he completed in the period of two months. 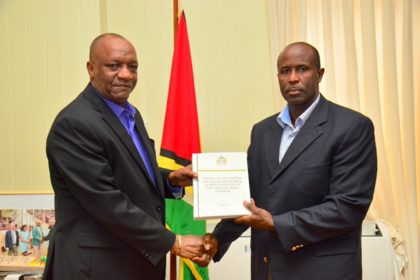 Minister of State, Mr. Joseph Harmon receiving the report from Brigadier Bruce Lovell at the Ministry of the Presidency

“I am positive that the Government will find favour with the recommendations as well as the conclusions and take the appropriate actions,” he said.

Meanwhile, Minister Harmon said that quite a number of statements were taken by persons, who had information regarding the allegations.

“It is important for us to have these inquiries done. The Opposition and several other persons keep saying we are having inquiry after inquiry, but this is the way that we will determine what the facts of a situation are. That is what we do; we get to the bottom of things, we get the facts and then we deliberate on it and the actions taken subsequently are actions, which are to be taken by the State,” the Minister said.

The report will be presented to the President and a copy will be handed over to Minister of Public Security, Mr. Khemraj Ramjattan.

Earlier this year, Mr. Dataram spoke to reporters at HGPTV Channel 67’s Nightly News, confessing that he is involved in the drug trade and accused top CANU officers of being in cahoots with drug lords.