Residents of Ithaca, West Bank Berbice, are calling for their Cultural Centre to be fixed since it is in a deplorable condition. The center with facilities to showcase folklore dance and songs was commissioned by Prime Minister, Moses Nagamootoo, in 1996, when he was Minister of Local Government and Information.

This call was made to Mrs. Sita Nagamootoo, wife of the Prime Minister and 1st Vice President, when she accepted an invitation from the residents to attend a community meeting, at the Ithaca Primary School on June 02, 2016.

Several issues were raised at the meeting including, the need for street lights. However, the residents see the need to renovate the village cultural centre as most important.

According to residents, some years ago, the nursery school was housed in the lower flat of the building but due to the building falling into a state of disrepair the students had to move.

Another resident expressed her concern that the youths in the community need some place to learn a skill and the cultural centre would be the place to facilitate this process. “We want to get the youth involved and teach them a skill,” she said. 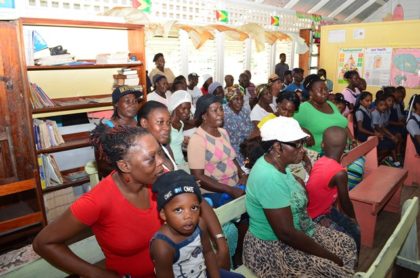 Residents at the meeting with Mrs. Sita Nagamootoo

During the interaction, the residents informed Mrs. Nagamootoo that the non-functioning cultural centre is hampering the development of talent in the community, women’s empowerment and youth development and, “it needs to be resuscitated.”

“So I am asking if you can please help us with the cultural centre, that is my baby, I would like to form the women’s group but because we don’t have anywhere to go that’s why we haven’t formed the women’s group as yet,” another resident said.

A teacher attached to the Ithaca Primary School used the opportunity to call for assistance to establish a school feeding programme for the students. “We have students who want to be at school, they are here in the morning and then they do not return in the afternoon because of whatever circumstances at home, so I am kindly asking for your assistance in this area,” the teacher appealed.

Mrs. Nagamootoo in her remarks, following the open floor session, committed to engaging the relevant stakeholders to examine possibilities of having the issues addressed. On the issue of street lights, “that is one of the areas, I can tap into for this to be done,” Mrs. Nagamootoo stated.

With regard the school feeding programme, Mrs Nagamootoo noted that there is a Government School Feeding Programme and asked that a letter be prepared by the school and sent to her so she can forward it to the respective agency. 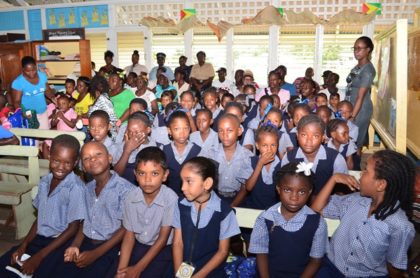 Students of the Ithaca Primary School at the community meeting

In relation to the Cultural  Centre, “I think that’s very important for the people to have something of their own and someplace from where they can work,” Mrs Nagamootoo said.

Mrs. Nagamootoo called on the residents to organize themselves into groups to move the community’s development forward. “You can form your group and start deciding what you want to do in the community,” she said

The Prime Minister’s wife committed to taking the issues raised at the meeting to the relevant agencies and persons. “I am here to advocate for Ithaca. I am not saying to you all these things, big things will come. Good things come by waiting and good things come by coming together and working together for the same goal but, I am here to advocate for you.

Ithaca is village located at the end of the West Bank of Berbice and is bounded by Blairmont Settlement to the left.