One year as Finance Minister for the coalition government, Winston Jordan describes his tenure as, ‘challenging but rewarding.’

Speaking with the Government Information Agency on the first year in office for the APNU+AFC government, Jordan said when he took office as the Minister of Finance he soon found out things were not so “kosher,” and within weeks of being in office, the government was faced with domestic and international issues.

“… sugar was worse than it was actually made out, and right away, we had to save jobs and save the industry by trying to find over $12B just as a quick cash transfer to the sugar industry,” Jordan recalls.

He noted that, simultaneously, the government had to divert much needed resources to “internationalise” Venezuela’s spurious claim on Guyana. This was even as the new administration was forced to find the money to pay farmers for rice already shipped to Venezuela after that country ended the rice for oil deal.

However, the minister did not paint a totally gloomy picture as he recalled some rewarding times. “We did some incredible things. We were able to bring out the (2015) budget fairly quickly and the last one, 2016, being one of the earliest in recent times. We were able to make good on some of our promises in whole or in part. We did quite a bit for pensioners, public sector workers benefitted somewhat, we were able to restore collective bargaining, … Critchlow Labour College had some of their subventions restored, and some trade unions were given money for  training,” he noted.

He also mentioned programmes to link the coast with the hinterland, the climate resilient programme and the greening of the economy. “There are a number of challenges of course, and at the end of the day, one year after, I figure I have more gray hairs,” he said. 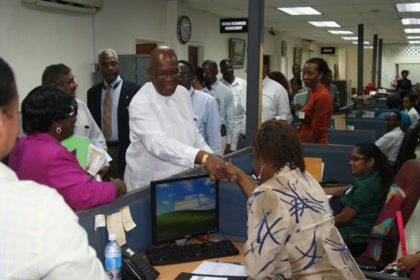 In terms of the Ministry of Finance’s capacity to carry out government’s mandate, one of the challenges Jordan identified was, the image of the public service being an employer of last resort and a rule-based organisation in which the rules were either out dated or not observed.

This coupled with the loss of skilled people in the 80s and the fact that the previous government created a parallel public service by engaging contractual employees to carry out the functions that were done by public servants negatively affected the ministry.

“People recognised that there are more exciting jobs in countries whose economy are growing, giving people more options,” Jordan said.

According to the Minister of Finance, the government became aware of the need for a strategy that would allow for the best and brightest to build capacity.  “It is not easy to attract accountants and then train these people in government accounting and have them pick up and go, and when you do your exit interview with them, one of the things is that the salary and condition are not acceptable,” he noted.

In terms of providing the public with an improved service, Jordan said his intention is to make the Ministry of Finance, “the first among equals where it will come to be known for its service to people, for efficiency in which it executes its tasks and people could look to the ministry for guidance.”

In this regard, his ministry has sought to turn around its public relations policy and create a more welcoming environment.

The minister noted that there was a lot still to be done but it is difficult to change overnight, practices that had been either instilled or become deep-seated over many years. 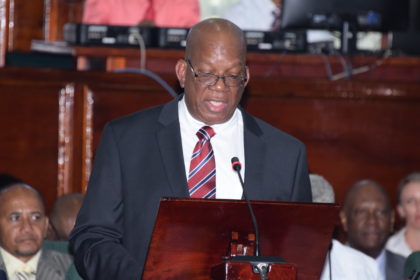 State of the treasury

When quizzed on the state of the public treasury when the new government took office, Minister Jordan readily pointed out that the Consolidated Fund was in deficit.

According to the minister a lot of public monies went through NICIL that should have been deposited into the Consolidated Fund and there were a number of semi-autonomous agencies that were collecting monies on behalf of the government. “It cannot be that the Guyana Forestry Commission would collect royalties on the forest which is a national patrimony and then seek to use it as they see fit, it cannot be!” Jordan asserted.

In an effort to correct malpractices, the minister said that the new administration has sought to close all unused bank accounts that have existed for many years and had balances in them. “The auditor general was complaining. Every year he complains of those unused accounts which could have been susceptible to theft and fraud because they were unused for long and persons would have attempted and I believe in some instances fraud would have taken place so we’ve have closed all of those,” Jordan said.

Continuing to identify efforts to regularise activities surrounding the management of the state’s finances, the Minister said they have sought to move all unused balances that existed in a number of companies including the National Frequency Management Unit, Guyana Forestry Commission, Lotto Funds and the Guyana Geology and Mines Commission.

In relation to the Guyana Gold Board, the minister said work is being done to regularise their operations since they are one of biggest users of the Consolidated Fund. “This should not be happening. I mean, the gold board should be standing on its own… The overdraft that they are running is outrageous and we can’t afford for such to continue for much longer,” Jordan said.

Efforts are also being made to rearrange the treasury itself with the upgrade of the Integrated Financial Management System (IFMAS), exposing staff to training both locally and internationally. “A number of treasury functions are absent from the treasury department. What we have right now is accounting function. The treasury department should be dealing with issues of treasury bills, bond financing and so on. This is not happening from here, but we’re building capacity,” the Finance Minister told GINA.

On the Guyana Revenue Authority (GRA), the Minister said he is not satisfied with the way the tax collection agency functions. According to the minister, on taking office, he found that the institution had deteriorated to a situation where the integrity of information was being compromised, corruption whether real or perceived was rife, systems were either non-existent, poor or not properly implemented and an altogether poor public image.

He however, pointed out that all is not lost at the agency since, “GRA has for the most part some competent staff.”

In relation to taxes, the minister declared that he would like to see taxes lowered on a sustainable basis not because some interest groups demand it, but because it is good for economic competition and sustainability. To do that, the minister said the GRA must first enforce the law fairly to ensure that taxes are paid when due.

Addressing issues relating to Anti-Money Laundering, the minister explained that the Financial Intelligence Unit (FIU) is critical to the implementation of the anti-money laundering legislation and when the new administration took office; neither a single individual nor entity had been identified or prosecuted under the various pieces of legislation in place.

“It is the current administration which actually passed the anti-money laundering legislation and subsequent regulations and amendments to that law on at least two occasions,” he noted.

Jordan also noted that the previously the FIU was staffed with a head, a legal assistant and an accountant but, currently the government is working to make it fully autonomous, independent and transparent. Toward this end, vacancies which exist for the FIU have been advertised and suitably qualified applicants will be recruited through a parliamentary process that involves the opposition.

The minister projects economic growth, but hastened to point out that Guyana is not on track to achieve a 7 percent (%) growth in the medium-term. “We are not going to grow by 7% if we continue to do the same things we were doing 50 years ago. To achieve such growth; the country needs to move from the “tripod” of rice, sugar and bauxite which it depended on for the last five decades with gold added to this mix. The country needs to focus on adding value to its commodities, by taking production to the tertiary level, diversifying agriculture, and modernising productive methods,” Jordan posited.

The minister agreed that the economy is not as buoyant as it needs to be and ascribed this partly to the role that illicit drugs and other illegal activities played in creating a parallel economy. “So the more that you go after that, and the more it will miniaturise, that is the less free spending you will see… it’s going to take a time for the economy to get comfortable with that, but in the meanwhile we will be putting other incentives to stimulate growth in the economy, but one good thing we can say, the economy will grow.”

Noting that earnings from bauxite would be affected by a sluggish global economy, Jordan opined that Guyana has to make better use of its gold including adding value. “We necessarily can’t control the ones that are being done by the multilateral agencies, but we can entice them to do another stage of the gold, gold bars for example might be good, coins …” he suggested.

Turning his attention to new industries, the minister said it is necessary to have fresh industries coming on stream and cautioned against getting too excited about petroleum exploitation. “We ought not to get ourselves way ahead of that. We have existing areas that new industries farmed out, particularly in the services sector. To get the services sector going, people have to be trained and adapted to what the market wants,” he noted.

Stressing the importance for Guyana to become more competitive on the world market, Jordan pointed to the fact that Guyana will lose its preferential market for sugar next year, and will therefore have to compete with all other sugar producing countries, especially those in the European Union. With the cost of producing sugar locally not being competitive on the world market, Jordan thinks the country needs to produce more to sell to others while recognising the need to support the growth of local industries by buying local produce. He also pointed to the need for value added production in the sugar industry.

Turning his attention to wages and salaries, the minister expressed the desire for the quick conclusion of negotiations with trade unions so that increases for public servants would be a smooth disbursement rather than a lump sum. “I hope to see, for example, the return of increment, I mean, years ago salary increases never happened. You had increment… I believe we have to get back there because, annual increases of salaries, I don’t think it gives the workers confidence,” Jordan said. He added that he plans to establish incremental scales, and performance-based bonuses.

Looking ahead to the next 12 months, Jordan says he does not support the idea of an annual budget being presented and passed within the fiscal year is covers. As such, he will be working with his team at the ministry and other stakeholders to see if Budget 2017 can be presented before the start of the new year. He however, cautioned that this is easier said than done.