The Amerindian Land Titling and Demarcation Project will end this year. Twenty -nine (29) out of the 45 communities targeted have been titled and demarcated to date while two other demarcation processes are ongoing and three certificates of titles are being prepared.

This project, which is being spearheaded by the United Nations Development Programme (UNDP), seeks to protect Indigenous rights and create livelihood opportunities for residents. 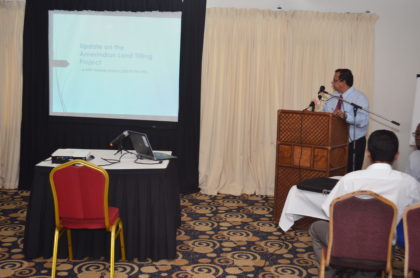 This two-day workshop which opened today at the Herdmanston Lodge, was organised by the UNDP and brings together stakeholders to discuss the issue of Amerindian rights and land titling.

Among the participants were representatives from the Ministry of Indigenous Peoples’ Affairs, National Toshaos Council, Amerindian Action Movement of Guyana, and Amerindian Peoples’ Association, the Guyana Women Miners Organisation and the Guyana Lands and Surveys Commission.

Monize explained that Amerindian rights date back 50 years, and prior to the launching of this project, 96 villages and communities received absolute grants and 77 villages were demarcated.

David James, Legal Advisor to the Ministry of Indigenous Peoples’ Affairs, highlighted the importance of the Amerindian land Titling Project, to the Ministry and by extension the Government of Guyana.  He said that the workshop will address some of the very key elements which could ensure that the whole question of land rights is done is a manner which is fair, transparent and brings justice to the beneficiaries.

James pointed out that the issue of land rights is an historical one, and that persons must reflect on what has happened in the past, think about what can be done now and in the future, to ensure that the youths can benefit from it.

Meanwhile, UNDP’s Representative, Patrick Chesney said that the project was a response to the need to accelerate the titling and demarcation of Amerindian lands in Guyana, and emphasises the importance of protecting property rights of indigenous peoples of Guyana.

Chesney said that there are sensitivities to demarcating such lands, given the significance of lands and resources to Amerindians, hence in 2015 the UNDP carried out an initial screening of the project. This process sought to identify the environmental and social risk and possible measures to respond to these risks.

He said that the result of that screening was presented to stakeholders and feedback was received, which allowed UNDP to refine the recommendations and developmental strategy to address the key risks and issues.

Under the Guyana REDD + Investment Fund (GRIF), Government signed a US$10.7M document in 2013, for the implementation of the Land Titling and Demarcation project. 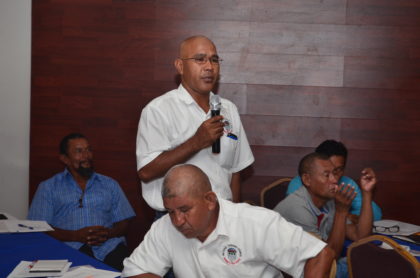