Employees of the Guyana Public Service Credit Union (GPSCU) will enjoy several benefits following the signing of a two-year Collective Labour Agreement with the Ministry of Social Protection’s Labour Department. 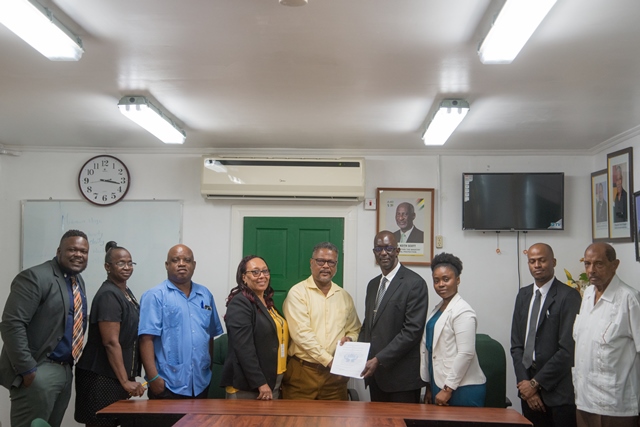 Head of the Interim Management Committee of the GPSCU Trevor Benn and Chief Labour Officer, Charles Ogle (yellow shirt) surrounded by members of the GPSCU after the inking of the collective labour agreement.

It replaces the one which was agreed to in 1975.

Benn said investigations found that staff of the GPSCU were working under less than desirable conditions. These included low salaries, poor working environment and low staff morale. He said that it was those findings that led the IMC to take immediate action.

He noted that with the new agreement, all staff members will now receive full gratuity since only a select few were receiving the benefit. Benn also highlighted that they had begun negotiations with the National Insurance Scheme for the implementation of a pension plan for the staff.

“So, with this new agreement, we have introduced for the first-time pension for our staff so they know with certainty what they are entitled to and what they can expect at the end of their work life. They also have for the first time, a medical scheme which they can benefit from,” Benn stated.

However, it was made clear that paternity leave would only be available to men in stable relationships with one partner in addition to them taking responsibility for their offspring. According to Benn, the staff will be better off as a result of the new agreement.

He added that the agreement would also benefit GPSCU members as they are looking for creative ways to include them so that they will be fully aware of the ins and outs of the body.

CLO Ogle said that while he commends the agreement, he is looking forward to seeing violence and harassment also addressed.