Following the recent termination of some 326 Guyanese workers by the Bauxite Company of Guyana Incorporated (BCGI)/RUSAL, the government continues to meet with its executives to determine the way forward.

TheChief Labour Officer, Charles Ogle and Consultant to the Labour Department, Francis Carryl engaged President of the Guyana Bauxite and General Workers Union, Lincoln Lewis as well as representatives of the RUSAL on Wednesday. 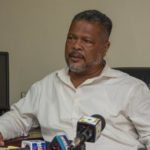 According to Ogle, the discussion held at the Minister’s office focused primarily on the reemployment of the laid-off workers and whether they were paid their severance among other entitlements.

“We were advised that all outstanding benefits were paid over to the workers,” Ogle revealed to media operatives.

He said this includes one month’s notice; all severance wages and annual leave.

“They are to submit to us the breakdown so that we can calculate and confirm that the terminal benefits are accurate,” the senior Labour Officer emphasised.

Ogle disclosed that among other inquiries by the Labour department, the suspension of operations in the Berbice River also made the agenda. The RUSAL officials indicated that all decisions depend on instructions received by their superiors overseas.  “We would have adjourned the meeting but the Union, on the other hand, undertook to facilitate the unblocking of the river,” he explained.

Meanwhile, Consultant Carryl said the union has indicated that they will detail in writing by mid of tomorrow, what they wish to achieve at the completion of the engagements.

“They are looking for somethings that are not yet identified. When we get that written request; which we will have to discuss further, we will know exactly how to move forward,” Carryl noted.